For Caitlin and Cassidy McAuliffe, two sisters from Sudbury, Ont., it all started with a picture.

"The first one we came across was Carolyn Mayben Flowers," said Caitlin. "So she was kind of what sparked everything actually. We just saw her photo and her photo was really cool."

Cassidy added, "She was by her canoe and her canoe had a little inscription that said ‘Lady Prospector’ and she’s just standing there next to her canoe, there’s kind of some men in the background. It’s a black and white photo because it’s the 1900s and she’s got this gun-slinging on her hip and she’s got her paddle."

That picture was the start of something bigger. A project highlighting women’s lives from the 19th and 20th centuries in northern Ontario.

"We just thought ‘who is this lady?’ and that’s when we followed her story," they both said.

"The art portion of the project is a print-making portrait series, so we hand-carve linoleum and roll it with ink and stamp it," explained Cassidy. "So it’s a portrait of each woman that we highlight and then the storytelling side is where we tell a story of the woman’s experience or time in northern Ontario through text, maps, photos, videos, archival materials – so like letters or news clippings from the past and we put that all together on an online platform called a story map." 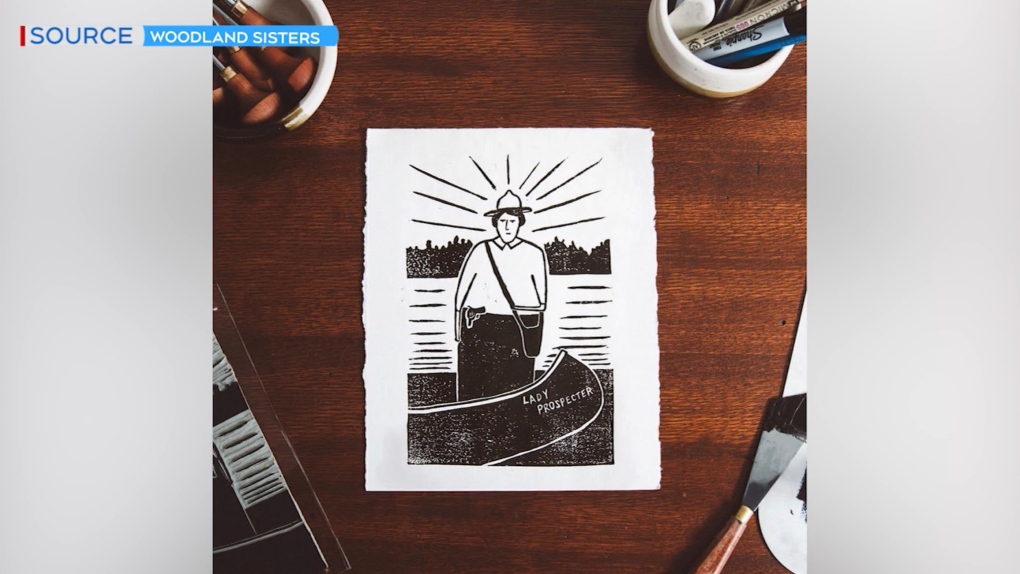 The McAuliffes started this project back in 2018 with the goal to highlight 10 different women. So far three stories are completed.

"It’s funny because when we were thinking about the project we were thinking about like ‘maybe we should mention the first woman lawyer’ or that sort of thing," said Caitlin. "But we were really interested in ‘how do people live in the bush?’ Like that remote interacting with nature and even sort of rural communities, that really interests us and I think it’s because that’s how we grew up."

Officials with the OAC said the project is being funded through its Northern Arts Program, which is specifically designed to highlight and help artists from northern Ontario.

The sisters said the money will go towards data collection, research, collaborative partners and helping to pay people who are working on the project, including themselves.

"We want to make sure that it’s done right and have the right people to look at it. So we’re going to hire those people," said Caitlin.

Overall they said the goal is to highlight women’s history in northern Ontario and make sure that people hear about their stories.

"We want to bring new perspectives about women’s history in northern Ontario to the fore," said Cassidy. "There’re so many rich and diverse stories of women here or have spent time here, but often they go unnoticed or undocumented or their accounts are fragmented. So we really want to collect these stories and curate them in a way that’s both engaging for readers but is also accessible online."

Caitlin added, "Basically everything is about place and how place shapes you or how it shaped these women -- even if they weren’t here for a long time -- or how you shape a place. I think that was one of the main things is were really interested in the (geographical) area of northern Ontario and mapping these stories."

Right now, the focus is on highlighting more women in northern Ontario and completing the Women Who Break Trail Project, however, there could be some big plans once the project wraps up.

"We don’t know for the future, but maybe we’ll have a little gallery opening or something like that and we can have them somewhere in Sudbury," said Caitlin.

Cassidy echoed those dreams, "I think it would be really incredible to have each of these portraits hung on the wall together in an exhibition with their story beside it."

Woodland Sisters was first created back in 2015 and the pair started with sustainable projects. Both their work and the Women Who Break Trail project can be found on their social media pages.

Ont. and Que. scramble to recover from thunderstorm that left at least 8 dead

A new study that brought sniffer dogs to an airport to search for COVID-19 has found that dogs may be able to detect the virus with high accuracy just from smelling skin swabs.

A Ukrainian court sentenced a 21-year-old Russian soldier to life in prison Monday for killing a civilian, sealing the first conviction for war crimes since Moscow's invasion three months ago.