Sudbury school honours resilience recognizes learning from the past

Sudbury school honours resilience recognizes learning from the past 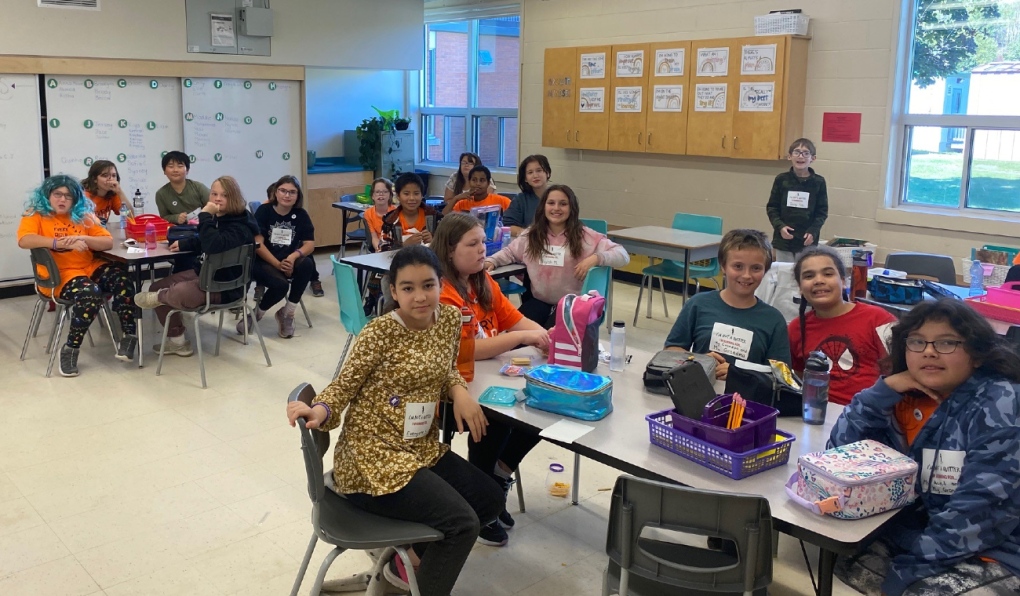 Grade 6 students at Queen Elizabeth II Public School enjoying a their nutrition break in their classroom on the National Day for Truth and Reconciliation before the school's Terry Fox Run. (Daniel Bertrand/CTV News Northern Ontario)

Students across the country honoured the National Day for Truth and Reconciliation on Friday and kids at one Sudbury elementary school also celebrated a Canadian athlete's legacy.

Discussions of resilience and the past could be heard in the halls and classrooms of Queen Elizabeth II Public School on Dell Street in Sudbury's Flour Mill area Friday.

The school not only honoured the National Day for Truth and Reconciliation but also held its annual Terry Fox Run.

For the second year in a row, Queen Elizabeth P.S. held its Terry Fox Run on Truth and Reconciliation Day. This year they chose to put the events together because the Terry Fox Foundation had selected their day for school runs as Sept. 23 but it was a PA day for the Rainbow District School Board (RDSB) and the school still wanted the run on a Friday.

"Initially when the first Truth and Reconciliation Day was sort of announced it fell on our Terry Fox Day and we questioned how we were going to put those two together. But the students did it for us; they drew lots of comparisons between resilience for Terry Fox or students who had been in residential schools and how we need to change what was done in the past and learn from it," Ms. Laura Young the organizer of the school's event, told CTV News.

Throughout September and October, students in area schools put their feet to work in support of the Terry Fox Foundation. Queen Elizabeth P.S. run was the second to last event for 2022 with Little Current Public School holding their run on Oct. 7.

RDSB collected more than $26,000 for the Terry Fox Foundation over the 2021-2022 school year. Over the years, Rainbow Schools have over $963,000 to help achieve Terry's vision–a world without cancer.

"We are nearing the $1 million mark," Nicole Charette of Rainbow District School Board said.

Queen Elizabeth P.S. had set a goal of $150 for its approximately 200 students.

"We aim for about a loonie per person because that was Terry's original fundraising goal," Young explained.

Since the students surpassed the goal they will have a school-wide pajama day on Oct. 7 as a reward. 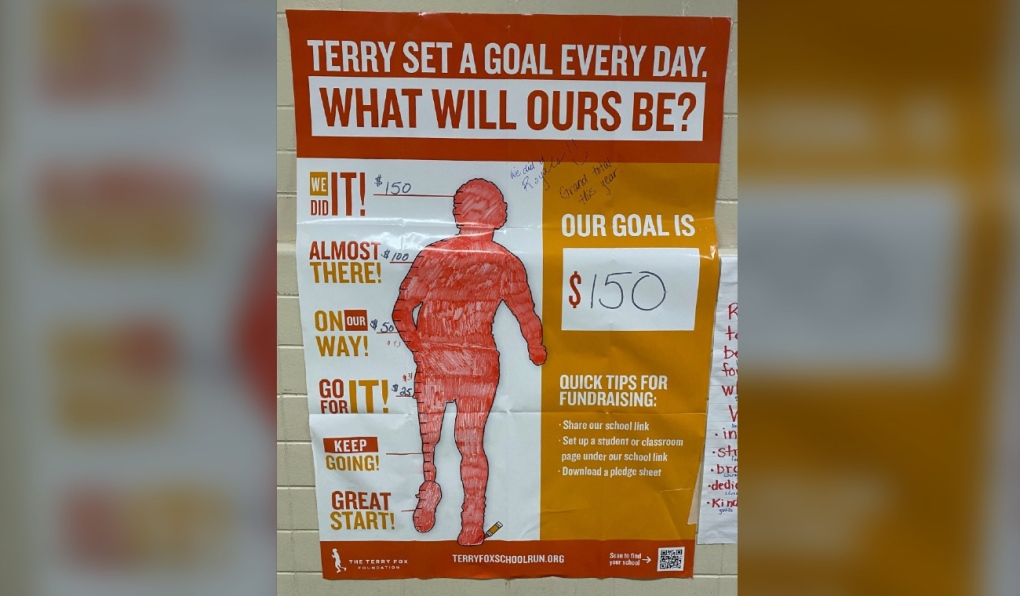 Queen Elizabeth P.S. kept track of its fundraising efforts for the Terry Fox Foundation all month. (Daniel Bertrand/CTV News Northern Ontario)"We are still working on the final numbers but it looks like went over it by 20 or 30 dollars which is really excellent for the school because they love having the group goal and they surpassed. They are ecstatic and they all cheered this morning when I announced it," said Young.

"Most of our donations are still cash; we did try school cash online for the first time this year and we did get some but most are still cash. Kids like to hand it to me or their teachers and the two-dollar mark is reasonable."

"We passed our goal which is excellent for the Queen Elizabeth community … I am hoping the reward was not the reason for their generosity," principal Cori Pitre told CTV News.

The run itself was held after the second nutrition break on Friday afternoon and is done as a school-wide event. All teachers meet their classes outside and they walk around the track located on the school property that once hosted the board's annual track and field meets. Some students walk, others chose to run and music is played on the school's portable speaker but it is done as one big group. 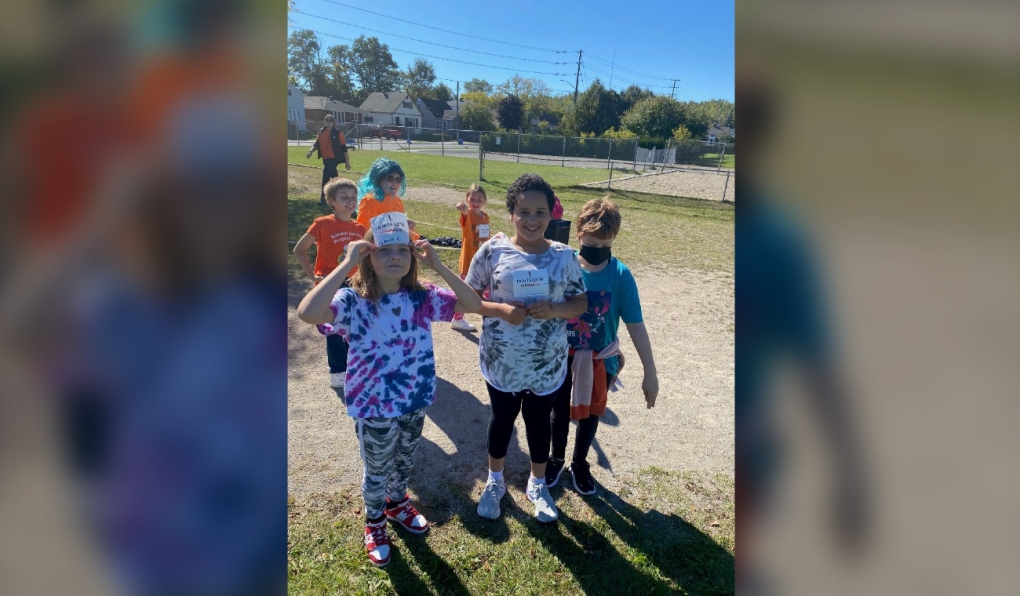 Young said many schools do the run as individual classes but they think it is important to get the whole school together to celebrate their fundraising accomplishment.

The run this year at Queen Elizabeth P.S. was a special one as it was the first year one of their own was celebrating as a cancer survivor. 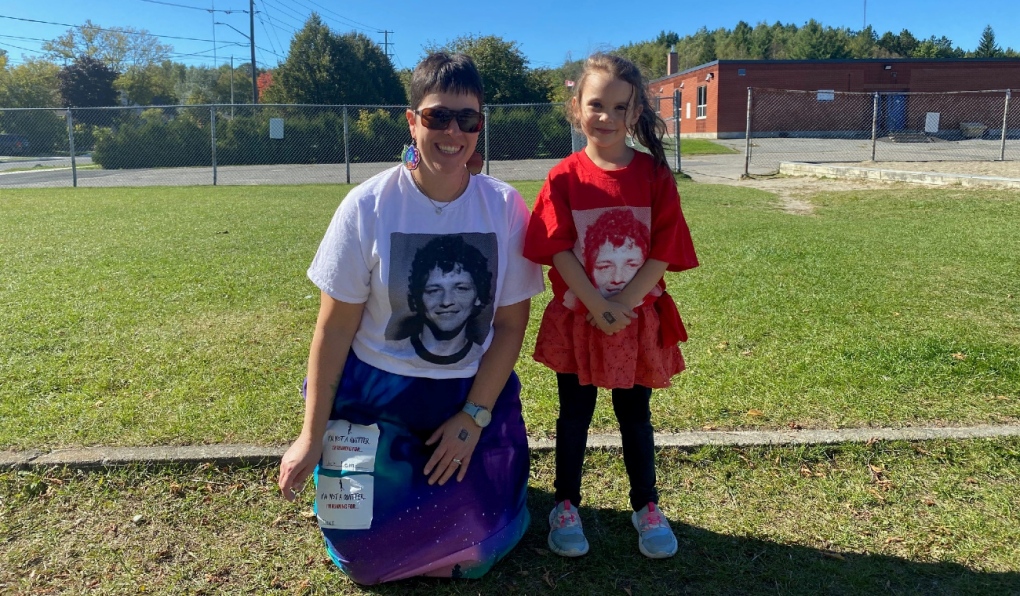 Ms. Laura Young (teacher) and Addylin Stacey (student and cancer survivor) outside of Queen Elizabeth II Public School on Sept. 30/22 prior to the start of the school's Terry Fox Run. (Daniel Bertrand/CTV News Northern Ontario)Addylin Stacey is in grade one and is currently the only cancer survivor attending the school as a student.

"I am running for myself today," Addylin said.

Addylin added that she was happy to see everyone participating.

Young has organized the event at the school for the past few years and saw the importance of getting Addylin a survivor shirt. They also arranged for every student to receive a popsicle following the run.

"Terry Fox means a lot to me my uncle died of cancer 15 years ago, my best friend is fighting cancer now and I do not mind supporting a little because it is nice to see the kids excited to fundraise for something good. We talk about hope and courage and reliance," Young added.

Before the run began, in the early afternoon, the school along with all other Rainbow Schools honoured residential school survivors.

"Staff and students will wear orange as we come together to continue to learn about residential schools and the impact on generations of Indigenous peoples," Bruce Bourget, Rainbow District School Board's director of education, said in a press release earlier this week.

"Schools will ensure Indigenous students, staff and families feel supported as we stand in solidarity with them during this time of retrospection and reflection."

Rainbow Schools played an honour/drum song recorded by Bryden Gwiss Kiwenzie, who is from the Indigenous Anishinaabe community in Sudbury. 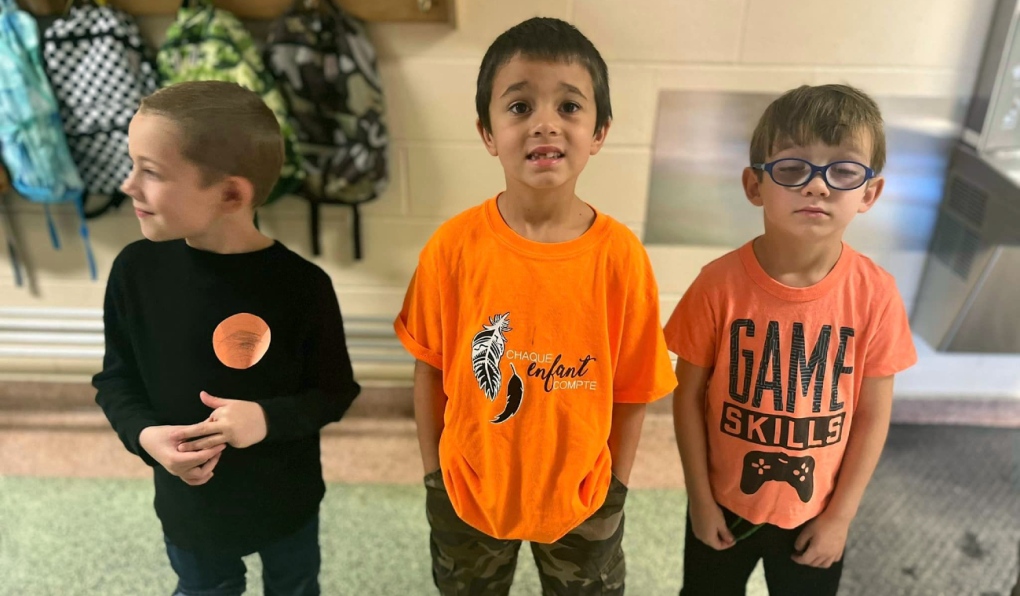 Students from Ms. Andrea Chadwick's Grade 1/2 class at Queen Elizabeth P.S. wearing orange on 2022's Truth and Reconciliation Day in honour of residential school survivors and children whom did not make it home. (Supplied)"So many students are wearing orange to support what today means," Anegloff said.

The Flour Mill area school held an assembly in the gym for the whole school to honour the experiences of residential school survivors and the impacts it had on First Nation culture in the area. 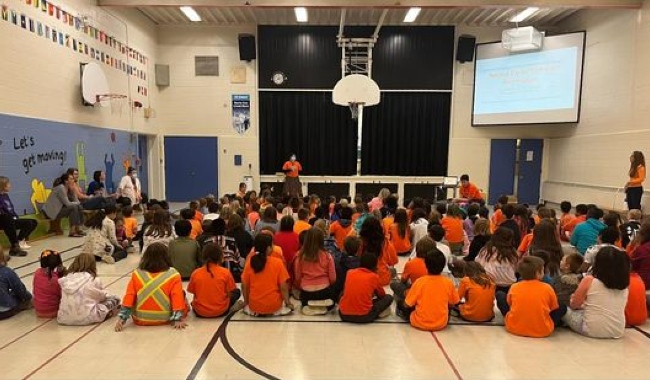 Queen Elizabeth II Public School in Sudbury held a school wide assembly to reflect on residential schools as part of National Day for Truth and Reconciliation on Friday. (Supplied)"We were very fortunate that Ms. (Lindsay) Samson and Ms. Young put together an assembly for the whole school. It was an excellent opportunity to bring all of the kids together and to build a collective understanding of the importance of the Day for Truth & Reconciliation," Pitre said.

Following the assembly the students began an art project in honour of the National Day for Truth and Reconciliation; every student and staff member got at least one popsicle stick to decorate to express a message about residential schools. Some used words, others drew symbols or pictures and a few just used colours to send their message. Staff will be putting them all together into a kind of popsicle stick quilt. The final project will be framed and displayed in the school as a reminder importance of Truth and Reconciliation. 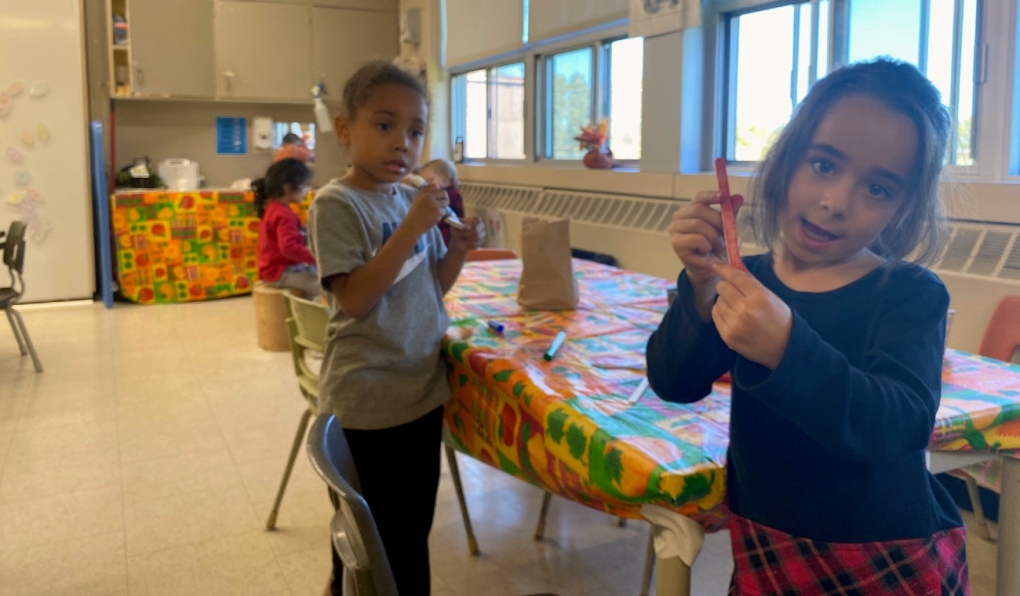 Kindergarten students at Queen Elizabeth P.S. decorating popsicle sticks on Sept. 30/22 as part of a larger art project to express a messages about residential schools. (Daniel Bertrand/CTV News Northern Ontario)"It is going to be on the wall as a sort of visual representation of our commitment to Every Child Matters," Young said.

More information about events happening at Queen Elizabeth P.S. can be found on their Facebook Page, which Pitre pledged to update regularly earlier this year.

CTV News in Pakistan: Afghans forced out of their homeland now homeless

CTV National News Executive Producer Rosa Hwang shares what she witnessed during a visit to a refugee camp in Pakistan, where Afghan children live in flimsy tents set up in a park, without the basics like running water or enough food, with only their mothers for protection.

Despite warm and mild temperatures stretching on throughout most of the fall season, the wrath of winter may be coming soon, experts say. But frigid temperatures aren’t expected to last.

Smith tables controversial sovereignty act, which is 'likely' to survive in court

Danielle Smith introduced the Sovereignty within a United Canada Act in the legislature Tuesday while trying to reassure Albertans that it has nothing to do with leaving the country.

The Bank of Canada lost $522 million in the third quarter of this year, marking the first loss in its 87-year history. In the central bank's latest quarterly financial report, it says revenue from interest on its assets did not keep pace with interest charges on deposits at the bank.

The RCMP has confirmed it is investigating 'broader foreign actor interference activities' in Canada, but Commissioner Brenda Lucki is declining to provide more details given the investigations are 'ongoing.'

Drug slows Alzheimer's but can it make a real difference?

An experimental Alzheimer's drug modestly slowed the brain disease's inevitable worsening, researchers reported Tuesday – but it remains unclear how much difference that might make in people's lives.

The Senate passed bipartisan legislation Tuesday to protect same-sex marriages, an extraordinary sign of shifting national politics on the issue and a measure of relief for the hundreds of thousands of same-sex couples who have married since the Supreme Court's 2015 decision that legalized gay marriage countrywide.

Chinese military jets conducted several intercepts of a Royal Canadian Air Force patrol plane as it flew surveillance sorties from Japan as part of an international effort to enforce sanctions against North Korea, the Department of National Defence confirmed Tuesday.