SUDBURY -- Soccer enthusiasts are thrilled to hear that a new and long-awaited indoor facility is finally open.

The $4 million soccer bubble is located beside Lasalle Secondary School.

"The staff and the students are so excited, number one, because we don’t have anything like this in the North right now," said the school principal, Maureen McNamara.

All students in the Rainbow District School Board will be able to use this new facility up until 6 p.m. each day, and administrators say it’s a much needed addition.

"We are moving beyond the regular scope of playing for example a soccer game in a gymnasium now we’re going to be able to do it in a field." said McNamara. "There are so many different types of sports now that the kids who sometimes may have never liked being in a gym are now going to get excited about coming out to the field."

Grade 11 student Mackenzie Roberts says because she has been part of the soccer community as long as she can remember, this dome is a dream come true.

“It’s crazy knowing that this time last year I was standing in an actual soccer field practicing with my team and now it’s a full dome. It’s a huge move forward for the youth in Sudbury and Sudbury in general for our sports community,” said Roberts. 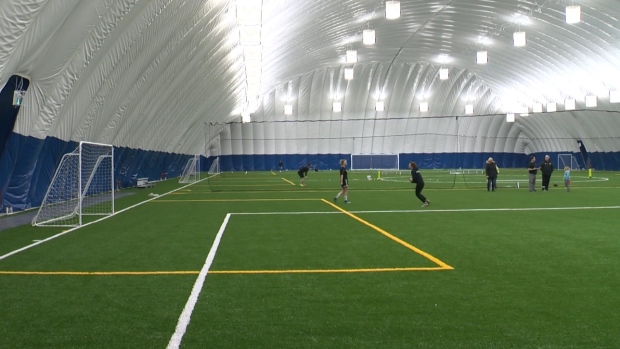 This has also long been a dream of the Fabio Belli Foundation, named after the late city councillor and soccer advocate. The foundation is encouraging various sports organizations to use the facility.

"We want people to support it through the various leagues, we finally built it and it costs money to run it but there are a lot of good organizations out there. So we have soccer, we have football, we have ultimate frisbee, softball, challenger baseball," said Dino Moretta, chair of the Fabio Belli Foundation. "So, if you see a league and you want to get active, enrol. Get involved. Be in here. It’s about getting healthier and active and this facility will allow you to do that."

Moretta says now that phase 1 is complete, the second phase will ideally begin to be built this fall, and will consist of a fieldhouse.

"This is a beautiful facility but there aren’t any change rooms, we want to put boardrooms, and we’re looking at grants from the government for that. That would basically finish this site by having an attached fieldhouse where we’d have those different amenities," said Moretta.

The first official soccer game under the new bubble will take place on Friday, Feb 14.

It’s big enough to host three games at once, and the rental rate will $145 per hour.