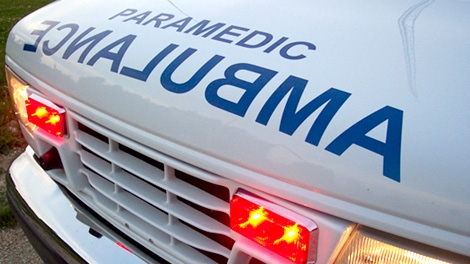 SUDBURY -- Sudbury police say a 50-year-old man has been arrested and charged with impaired driving after a three-vehicle crash on MR80 sent one man to hospital in critical condition.

Police say their investigation has revealed that a Honda traveling towards Sudbury collided with a Kia travelling in the same direction causing the Kia to spin out and hit a Mercedes on the opposite side of the road.

They say the 35-year- old driver of the Kia was ejected from the vehicle and was rushed to hospital where he remains in critical condition. The driver of the Mercedes sustained minor injuries.

While speaking with the driver of the Honda, officers say they detected signs of impairment. The 50-year-old man was arrested and charged with impaired driving after allegedly blowing over twice the legal limit. Additional charges may be pending.

Police say the name of the accused cannot be released as the information has not yet been sworn to through the Court process. He was released on a Promise to Appear.

The Traffic Management Unit continues to investigate this incident and anyone with information related to the collision or the driver of the Honda is asked to contact Police at 705-675-9171 or Crime Stoppers at 705-222-8477.

SUDBURY – A serious three-vehicle crash in Sudbury's valley has one man in hospital in critical condition.

Sudbury police say it happened Monday night around 6:30 p.m. on MR80 in Val Caron between Cecile Street and Isabelle Street.

As a result, a 35-year-old man remains in hospital with serious injuries.

The road was closed overnight in both directions between Dominion Drive and Main Street, but reopened early Tuesday morning.

An investigation is ongoing.

CTV News will continue to follow the story and provide an update as the information becomes available.