Sudbury police say they have arrested a 24-year-old man in connection with vehicle theft and several hit-and-run crashes in the city.

It started after Sudbury police received a call about an erratic driver in the area of Cote Boulevard in the Valley around 9:30 a.m. The man was doing donuts in a pickup truck in the middle of the road, then was seen driving into oncoming traffic and got into the first of three crashes on Skead Road. The other driver was not injured and the suspect fled the scene.

Police said the man ditched the pickup after getting into a second crash and stole an unoccupied postal vehicle on Old Skead Road.

The third crash involved a truck on Longyear Drive in Falconbridge and resulted in the accused fleeing into the wooded area off the road. A search involving the canine unit was unsuccessful. 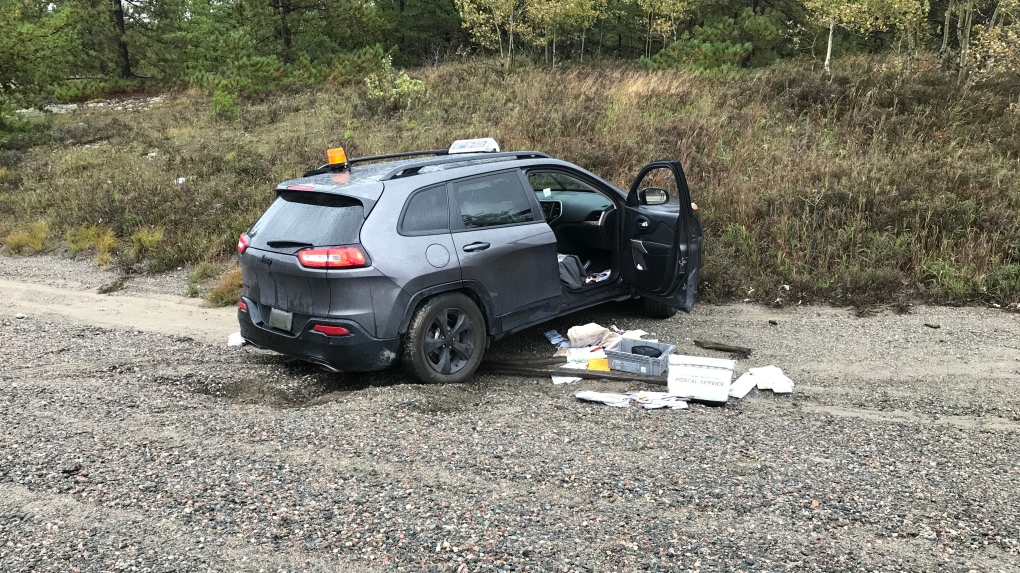 Canada Post rural delivery vehicle was one of the vehicles involved in a hit-and-run crash. Sept. 21/21 (Molly Frommer/CTV Northern Ontario)

A tip about the man's whereabouts came in around 6:15 p.m. Tuesday and matched the description of the driver involved in the incidents earlier in the day. He was found in the area of the last crash near Falconbridge Highway and Longyear Drive in Falconbridge and community members detained him until officers arrived to arrest him 15 minutes later.

He is now charged with:

He was held in police custody overnight and is scheduled to attend a bail hearing on Wednesday.

Colin Powell, the trailblazing soldier and diplomat whose sterling reputation of service to Republican and Democratic presidents was stained by his faulty claims to justify the 2003 U.S. war in Iraq, died Monday of COVID-19 complications. He was 84.

Former U.S. President Donald Trump on Monday sought to block the release of documents related to the Jan. 6 insurrection to the congressional committee investigating the attack, challenging the decision of President Joe Biden.

77 per cent of Canadians aged 55-69 worried about retirement finances: survey

More than three quarters of Canadians nearing or in early retirement are worried about their finances, at a time when more and more Canadians plan to age at home for as long as possible, a new survey has revealed.

Former U.S. President Donald Trump answered questions under oath for about 4 1/2 hours Monday as part of a lawsuit brought by men alleging they were assaulted by his security during a demonstration outside Trump Tower in 2015, a lawyer for the plaintiffs said.

Los Angeles County is seeking to compel psychiatric evaluations for Kobe Bryant's widow and others to determine if they truly suffered emotional distress after first responders took and shared graphic photos from the site of the 2020 helicopter crash that killed the basketball star, his teenage daughter and seven others, court documents say.