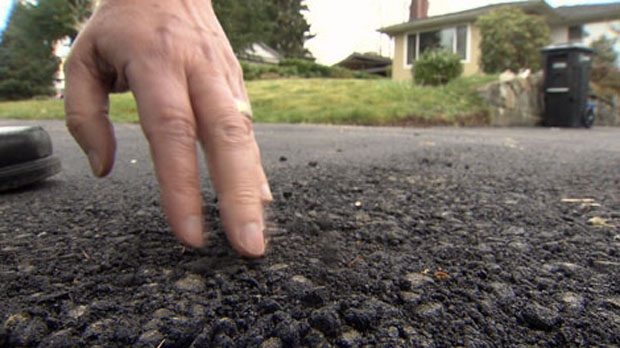 Known as hot-in-place asphalt recycling, a total of 77 lane kilometres of road in Greater Sudbury have been identified in the city as suitable for the process. (File)

SUDBURY -- Next week, city council in Greater Sudbury will review details of a pilot project aimed at extending the life of roadways, at a lower cost and with a smaller environmental impact.

Known as hot-in-place asphalt recycling, a total of 77 kilometres of road have been identified in the city as suitable for the process.

For 2020, $1,390,000 has been set aside to resurface about 25 lane kilometres along four major streets: MR35, from Clarabele Road to Big Nickel Road; The Kingsway, from Falconbridge Road to Levesque Street; Radar Road, from Skead Road to Pine Street Ridge; and, Bancroft Drive, from The Kingsway to Bellevue Avenue.

First the asphalt is heated to soften it up, then one- to two-inch sections are removed mechanically, a process known as 'scarification.'

Then the removed material is mixed with recycling and other agents and used to repave that part of the roadway.

Only certain roadways are candidates for the process. There can't be too much structural damage for the treatment to work.

"In selection of road candidates to be considered for HIR, pavements need to be free of major structural distress such as structural cracking and excessive rutting," said a staff report on the project. "Asphalt material testing of candidate road sections includes tests for asphalt cement content, asphalt cement penetration, and air voids to ensure compatibility with the proposed treatment."

Up to 35 per cent less energy

According to an article in Informed Infrastructure, new techniques that have been developed in recent years mean hot-in-place uses up to 35 per cent less energy than conventional pavement methods.

"(It) requires up to 50 per cent less asphalt cement than conventional equivalent methods," the article said. "And minimizes lane closures, sparing motorists the risks of driving on uneven, oily surfaces and the dangers of loose rocks and other construction debris.

"By using less energy and emitting fewer greenhouse gases than other pavement methods, HIR also can help meet sustainability requirements. Because the repaving method is completed in a single pass, it saves time and taxpayer dollars."

It fell out of favour in many areas, the article said, because not enough work was done ensuring the roads were good candidates for the process, so the process wasn't effective.

In Sudbury, staff hired a geotechnical expert to identify 77 kilometres of suitable roadways. If approved at the July 7 city council meeting, work on the four local roads would be completed this year, with a report on the results due before the end of 2020.

"This pilot project will help determine if HIR is a cost-effective strategy within our community when considering factors such as existing road structure/asphalt material conditions and available contractors and equipment," the staff report said.