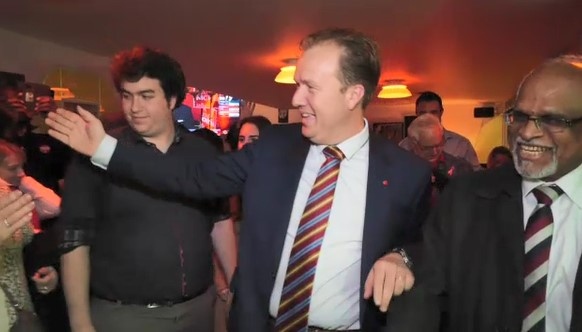 Sudbury MP Paul Lefebvre is seen after his reelection victory in 2019. The Sudbury MP announced Friday he's not running for re-election. (File)

SUDBURY -- After six years as the Liberal Member of Parliament for Sudbury, Paul Lefebvre announced Friday he won't seek re-election in the next federal vote.

"I have valued every moment I have spent in Ottawa, working for Sudburians," Lefebvre in a statement on social media. "But the time away from my family these past six years has been difficult, and it’s time someone else earned the chance to serve this great riding.

"For this reason, I have decided I will not seek re-election when this term of Parliament is dissolved."

He said he would work to elect another Liberal MP in Sudbury when the next vote is called.

"After that, I look forward to resuming my life as a private citizen, as a husband and a father, as a neighbour and a friend, and as an advocate for all things Sudbury," Lefebvre said. "I am more optimistic than ever about the future of our great city, regardless of the role I play in it."

Lefebvre, a tax lawyer and business owner before entering politics, was first elected in 2015 when Prime Minister Justin Trudeau swept to power with a majority government. He was re-elected in the 2019 election, when Trudeau's government was reduced to a minority. Lefebvre is the Parliamentary Secretary to the Minister of Natural Resources.

"It has been a constant ambition of mine to serve the community of Sudbury that I am so proud and fortunate to call home," Lefebvre said in his statement. "We have brought more than $500 million in federal investments into the riding of Sudbury … in roads, public transit and active transportation, flood mitigation, public safety, social services, health care, housing, arts and culture, seniors services, trades and employment training, post-secondary research … and so much more. We have nurtured the partnerships that made all of this possible and helped raise Sudbury’s profile nationally and internationally."

He said he was proud to be a member of "Team Trudeau," to promote Canada’s mining and minerals sector around the world.

"And I have worked to promote Sudbury’s exceptional global position as leader in mining and minerals exploration and processing," Lefebvre said. "This latter point is especially important given the leading role Canada’s resource sector will play in the critical race to decarbonize our economy."