With a team of supporters beside him in the water, a welcoming committee waiting on shore, and the memory of a very special little boy pushing him on, Mattieu Bonin swam across Lake Wanapitei on Tuesday.

Everett, known as Evvy, was just about to turn four years old when he passed away from a rare heart defect called Ebstein anomaly.

“We want to build Evvy a legacy of light, you know,” said Bonin. “He was a trooper. He never quit. He came out fighting. He fought until the end and that’s how we want to remember him. Definitely this swim would not have gotten done without him pushing me. He was the wind in my sail, so to speak.”

“(He had) six open heart surgeries before he turned four,” said Evvy’s dad, Kristofer Cacciotti, who was on the support boat during Bonin’s swim.

“Everett’s spirit was larger than life. He was a tiny little boy but he filled any room that he was in and he had a very special ability to leave a trail of smiles in his wake,” he added.

“I would take Everett for blood work once a week and even walking in the hospital, he’s about to go get poked, and just the presence that he carried walking through the hospital, he would just turn heads.”

Bonin started around 6:30 a.m. Tuesday, taking on the longest swim he’s ever done.

“When I was on shore looking across, there was some fear," he said. "It was definitely intimidating. It took me about 30 minutes to get into a grove and then it was good."

There was a point during the swim where he hit a strong current and whitecaps, which he said were both physically and psychologically challenging. 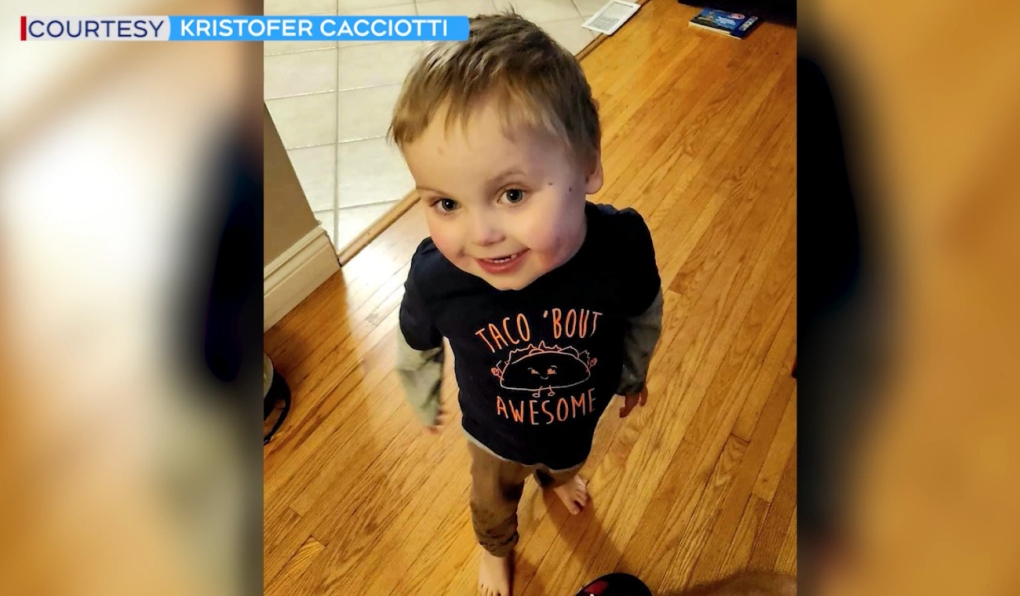 The swim was in honour of Everett, known as Evvy, who was just about to turn four years old when he passed away from a rare heart defect called Ebstein anomaly. (Supplied)

“I let my support/hype staff know that, you know guys I need some motivation," Bonin said. "So they started hyping me up and cheering me on and Kris broke out the pictures of Evvy and to me the message was clear: don’t quit. You know, Evvy didn’t quit, so don’t quit.”

Bonin said it was an emotional day from the beginning.

“I knew it was going to be an emotional swim," he said. "Kris built a little shrine to Evvy in the boat. He had his Buzz Lightning action figure, his favourite book, his shoes. As soon as he took all that out, the tears were flowing.”

Bonin wasn’t the only one with tears flowing on Tuesday.

“It brings me to tears. I was watching Matt come in and I had tears streaming down my cheeks because… words can’t even really describe it,” said Cacciotti. “It’s something that I’m going to carry with me forever.”

Bonin had a goal of $10,000 for his swim and the money raised will be donated to the Neo Kids Children’s Treatment Centre. It will be used to help children like Evvy receive the support they need.

“With respect to the various complications in his heart and the complications… he couldn’t walk, and he learned how to walk there,” said Cacciotti. “He learned speech therapy, occupational therapy and that allowed him to experience the world in a much better way and a much more enjoyable way.”

Now with the physical challenge over, Bonin and Cacciotti said they will continue to be inspired by Evvy in their day-to-day lives.

“Regardless of all the challenges that Everett faced in his life -- six open heart surgeries, countless bloodwork, multiple medications three times a day -- regardless of all of that, Everett only saw the good in the world,” said Cacciotti.

Bonin is already planning his next big swim in September across Ramsey Lake in Sudbury. That will be in support of Camp Quality and more children in need.

Donations to Neo Kids and in memory of Evvy can still be made here.