It’s been a scary couple of weeks for Cameron Stone and his family, but the Sudbury man says he's firmly on the road to recovery.

On June 6, Stone was seriously injured while working in the city's Flour Mill area. A lift he was working on collapsed, leaving him with 10 broken ribs, a major neck injury, staples in his head and a shattered pelvis and hip.

"Now that things are healing and progressing, I can’t be any happier than that," he said, sitting in a wheelchair outside Health Sciences North and enjoying the fresh air.

It turned out that the piece of heavy equipment he was using hit a sinkhole, causing the catastrophe.

"When I was on the lift, my one wheel fell through and brought me down with it," Stone said.

"I was harnessed and everything so I couldn’t go anywhere. I was stuck."

Things get hazy after that, he said, describing moments after the accident as a "blackout."

But his mom, Line Stone, said she remembers it all, beginning with the dreaded call telling her she needed to go to the hospital.

"You get that phone call saying that, 'you need to get to the hospital -- we don’t know if your son’s going to make it.' So that was very, very hard, of course … He was in a coma for the first week and after that he had pneumonia and he had a fever with it. They had to put him in a coma at night still.”

What wasn't yet clear was the extent of the head injuries – and how much they would affect Cameron once he woke up. So it was a relief when he woke up and everything seemed fine. 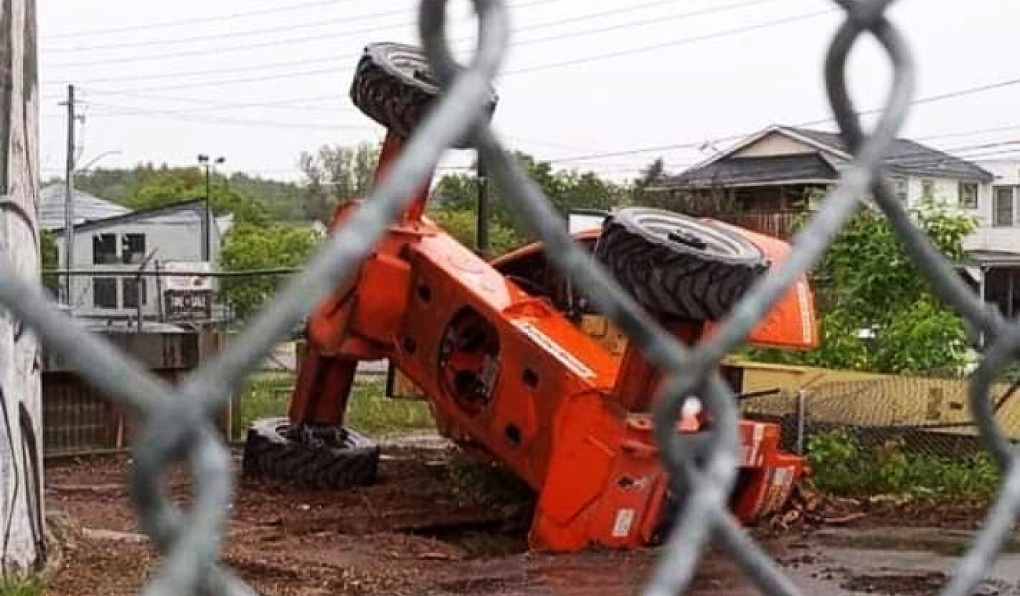 On June 6, Cameron Stone was seriously injured while working in the city's Flour Mill. A lift he was working on collapsed, leaving him with 10 broken ribs, a major neck injury, staples in his head and a shattered pelvis and hip. (Photo courtesy of Line Stone)

"It was Cameron, so we were very fortunate," Line said.

"Somebody was looking out for him. With all his injuries, his brain was OK."

"Just when you think the world is going crazy, you get this group of people that just come together and offer support," said Line.

"Complete strangers and it was just fantastic."

With the financial help and her son well on the road to recovery, Line said she can relax after a difficult month.

"You don’t know how much it means to have that support until you’re in this situation," she said. "Now I can sleep at night."

"We get these messages, right, from everybody, people dropping off money, dropping off food, everybody supporting us all the way from Ottawa, Toronto – everybody," she added.

For his part, Stone wants to thank everyone -- from his team at the hospital, to his family, to the community.

"Obviously, thank the doctors and the nurses because they’re amazing here," he said.

"Mom and dad have been staying overnight helping me out, for the first bit anyways, not so much now, because I am getting better. I also have my little girl over there keeping me motivated and my wife coming to visit me -- so I can’t beat that either."

His daughter is now three months old and the family joked they are learning things together now, including how to sit up on their own.

Cameron hopes to get out of the hospital by the end of the month, but an exact date hasn’t been set yet.

An Ottawa restaurateur says he was shocked to find his restaurant broken into and even more surprised to discover a giant hole in the wall that led to the neighbouring jewelry store.

Mendicino: foreign-agent registry would need equity lens, could be part of 'tool box'

Public Safety Minister Marco Mendicino says a registry to track foreign agents operating in Canada can only be implemented in lockstep with diverse communities.

Vaccine intake higher among people who knew someone who died of COVID-19: U.S. survey

A U.S. survey found that people who had a personal connection to someone who became ill or died of COVID-19 were more likely to have received at least one shot of the vaccine compared to those who didn’t have any loved ones who had been impacted by the disease.