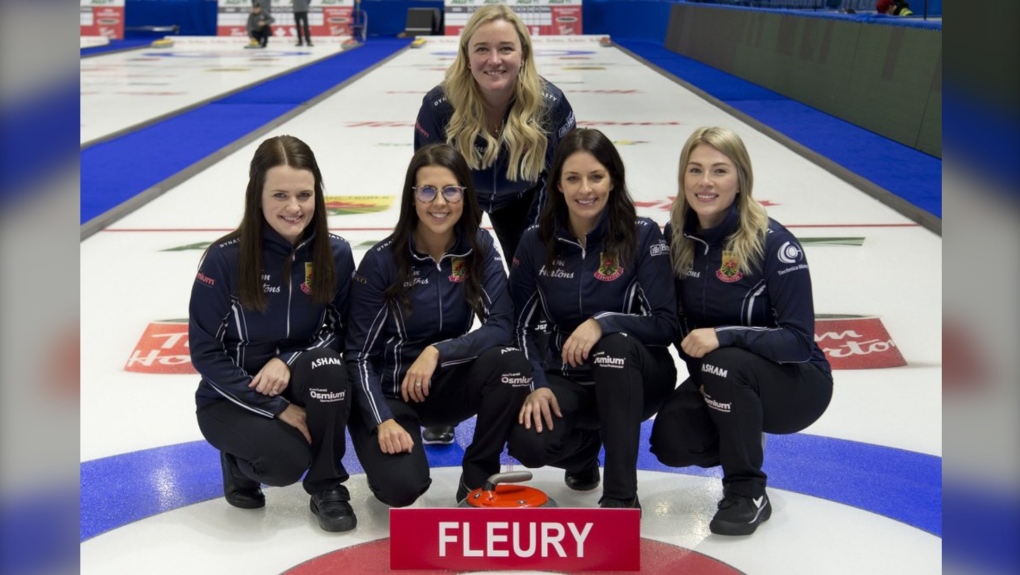 Jennifer Jones defeated Tracy Fleury 6-5 in the women’s final after Fleury rubbed a guard on her final throw in the extra end to give Jones the steal and the victory. Nov.28/21 (Twitter photo/ Team Fleury)
SASKATOON -

Jennifer Jones defeated Tracy Fleury 6-5 in the women’s final at Canada’s Olympic curling trials to secure a berth at the Beijing Games.

Fleury rubbed a guard on her final throw in the extra end to give Jones the steal and the victory.

The dramatic finish came after a stunning Jones miss in the 10th end. Down one with hammer coming home, Jones had an open takeout for the win but only scored a single when her stone rolled out.

Jones and her team of Kaitlyn Lawes, Jocelyn Peterman, Dawn McEwen and Lisa Weagle entered the showdown of Manitoba-based teams with a big edge in experience.

Fleury, meanwhile, and her side of Selena Njegovan, Liz Fyfe and Kristin MacCuish, were making their first appearance in a final.

Early jitters seemed to be a factor.

Rollouts were common in the first end and Jones put early pressure on to generate a quick steal. Jones buried a draw to force Fleury to tap but she rubbed her own stone and rolled off.

Njegovan’s numbers were low in the early going. The vice-skip moved two of her own stones on a runback attempt in the second end but her side recovered for a single.

Jones made some mistakes too as she sent a draw through the rings in the third end, eventually settling for a hit for two.

Congratulations to @TeamJJonesCurl on an incredible game, their win and earning the opportunity to wear the 🍁 in Beijing.

We are fully behind you guys and know you’ll be an amazing representative for @CurlingCanada and #TeamCanada #Trials2021 pic.twitter.com/sbGPATc1Et

Fleury responded with a pair of her own and Lawes came through in the fifth end with a brilliant triple-takeout that set up a blank.

The top-ranked Fleury team wasn’t nearly as dominant as they were throughout most of round-robin play at SaskTel Centre.

Her perfect 8-0 mark gave her the first seed and an off-day ahead of the final. Jones was 5-3 in round-robin play and defeated Krista McCarville in the semifinal on Saturday.

Jones gave away another point in the sixth end when her draw rubbed the shot stone and settled on the edge of the four-foot ring. A measure confirmed a single instead of a pair, giving her a 4-3 lead.

In the eighth end, Fleury looked to set up a force but Jones made a hit and rolled under cover to save the blank.

Njegovan stepped up her game in the second half. She made two excellent taps in a crowded house in the ninth end that forced Jones to call a timeout.

Fleury followed with two decent draws and Jones decided to give up a single to keep hammer for the 10th end.

Kevin Koe and Rachel Homan skipped the Canadian team entries at the 2018 Winter Games but both missed the podium.

Lawes and John Morris won the mixed doubles title in the discipline’s Olympic debut that year in Pyeongchang, South Korea.

The Beijing Olympics are scheduled for Feb. 4-20.