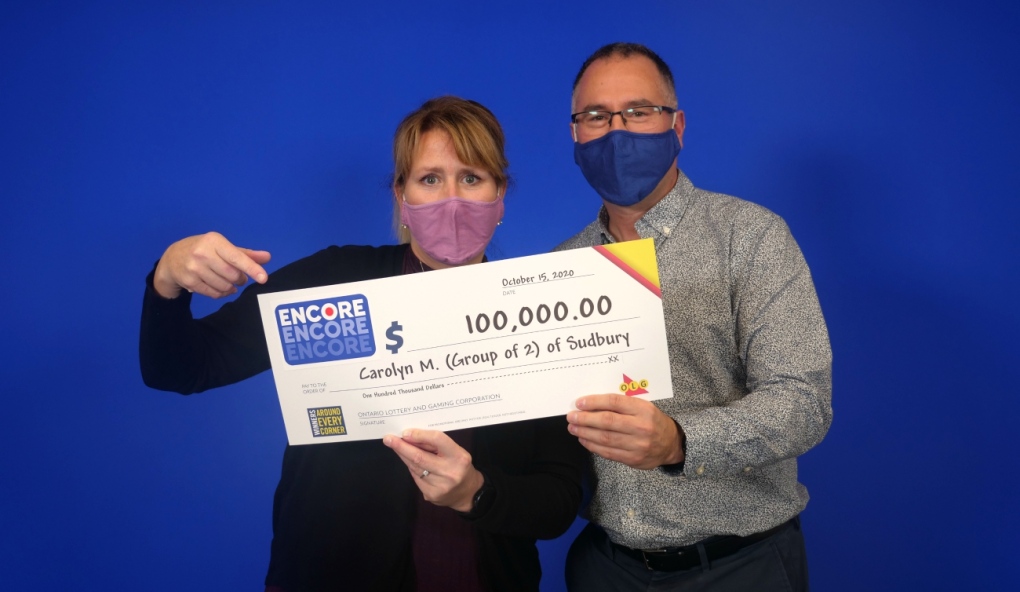 Carolyn Malette and Jacques Martel of Sudbury matched the last six of seven Encore numbers in exact order in the Oct. 3 Lotto 6/49 draw to win $100,000. (Supplied)

SUDBURY -- Carolyn Malette and Jacques Martel of Sudbury matched the last six of seven Encore numbers in exact order in the Oct. 3 Lotto 6/49 draw to win $100,000.

Malette, a 54-year-old nurse, and Martel, a 55-year-old financial planner, said they are regular lottery players.

“We play the same numbers – usually significant family dates like birthday and anniversaries,” the couple said while at the OLG Prize Centre in Toronto to pick up their winnings.

Malette checked their ticket using the Ticket Checker and that’s when they both were in disbelief.

“Carolyn had tears in her eyes when she turned to me and said, ‘I think we won something,’" Martel said. "I couldn’t believe it.”

The couple will use some of their winnings for house renovations they already started and put some on their mortgage.

“Carolyn’s brother suggested my half go towards the renovations and Carolyn can enjoy her half as she wishes,” Martel joked.

The winning ticket was purchased at Rexall on Bancroft Drive in Sudbury.

OLG is now accepting in-person prize claims by-appointment only for customers with prizes of $1,000 or more who wish to claim at the OLG Prize Centre. To best protect customers and staff, OLG has put in place appropriate health and safety protocols in accordance with guidelines from public health officials.