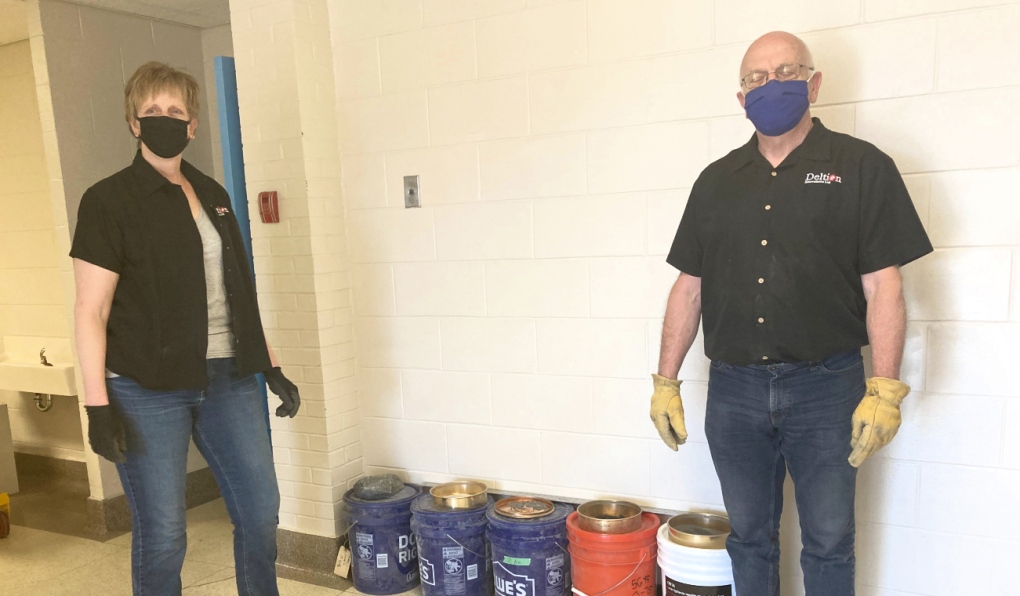 Pictured are Dale Boucher, right, and Sherry Schmidt (left) both of Deltion Innovations based in Capreol. (Alana Everson/CTV News)

SUDBURY -- Deltion Innovations, a company based in Capreol in Greater Sudbury, has developed a product that simulates moon dust.

It's a pilot project and NASA will be using the material to test space mining hardware specific to the moon.

The simulated product is called OB1A was being prepared to be shipped to NASA on Friday.

"OB1A is a physical simulant that reproduces the mechanical characteristics of the lunar mountainous ranges," said Dale Boucher, CEO of Deltion Innovations. "Typically found on the South Pole or in the highland ranges such as where Apollo 16 landed for example."

It's a product developed in Sudbury with strong ties to northern Ontario.

"The rock is unique to northern Ontario -- it's actually found just outside of Foleyet and the slag is produced at one of the local smelters here," said Boucher.

The rock from Foleyet is about 2.5 billion years old.

The recipe for OB1A has been in the making for the past 15 years.

"We have done some verifications on size, shape and size fraction, so we are quite confident this will perform the way that NASA is expecting and it is possible that they will have a need for a greater amount of simulant in the future," said Sherry Schmidt, the CAO of Deltion Innovations.

"But this is just one component of their simulant program right now."

This is a pilot project with OB1A being sold to NASA for US$15,000 per tonne to test a number of space mining technologies.

"We know that the astronauts when they were on the surface of the moon were very close to having catastrophic failure in their joints of their spacesuit because of the mechanical characteristics of this lunar dirt, this regolith, it got into the joints it abraded the joints," said Boucher.

He said the simulant is the closest to rock on the moon.

"Our simulant replicates a lot of those characteristics. It's highly abrasive, it's nasty, it's very fine, it gets into everything," said Boucher.

Officials at Deltion said they hopeful for bulk orders in the future so the northern Ontario company can continue contributing to space innovation.