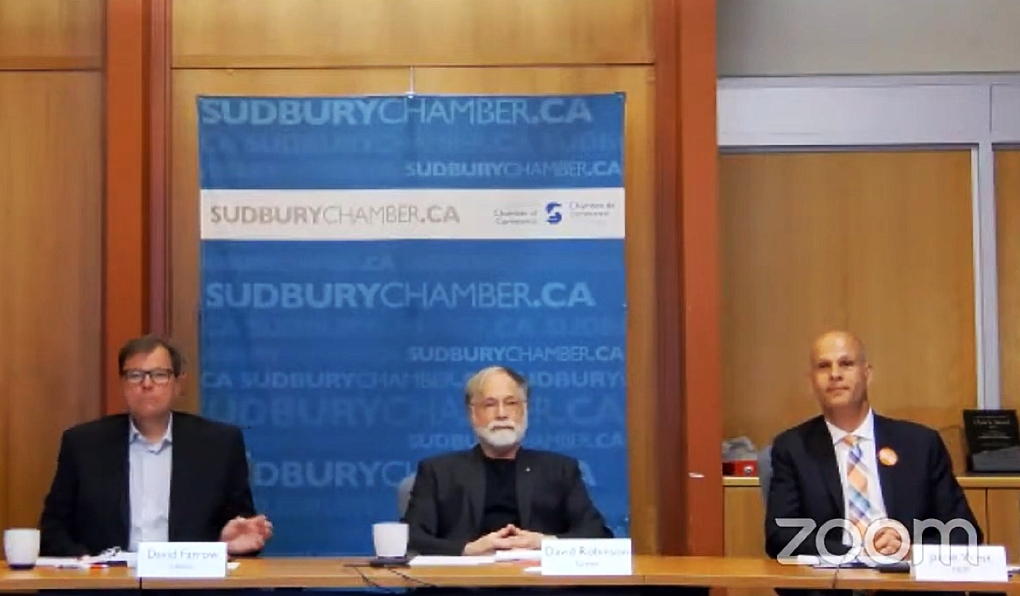 Three of the four candidates in Sudbury from the major parties took part in an online debate Wednesday hosted by the Greater Sudbury Chamber of Commerce.

Missing was Progressive Conservative candidate Marc Despatie, who spent the evening knocking on doors. The party has not said why it skipped the event, and its Nickel Belt candidate, Randy Hazlett, is not expected at Thursday's Nickel Belt event, also hosted by the chamber.

The event was billed as a "fireside chat," and a collegial tone was the rule throughout the two-hour discussion.

"Great points made by both of my counterparts," Farrow said at one point.

The trio agreed, for example, that Laurentian University should never have declared insolvency under the Companies' Creditors Arrangement Act.

"We did not have to go through the CCAA process," Farrow said. "Quite frankly, we never had a chance to do a made-in-Sudbury solution."

Robinson said his priorities was to make residents richer, while helping them avoid a "climate catastrophe."

West focused much of his remarks on affordability and the impact rising prices are having on ordinary people.

"People in the north should not be waiting several months to see a doctor," West said.

"Seniors shouldn't be suffering in long-term care. Families shouldn't be struggling month after month to pay the bills, or put gas in the gas tank or food on the table."

Home ownership, once a dream of young residents, now seems a remote possibility for many people, he added.

"People tell me I will never be able to afford a house," West said. "We need to cool off the housing market."

Farrow said Liberals would restore $72 million he said the Tories have cut from the Northern Ontario Heritage Fund so small businesses have a better chance to grow.

"Small business are the backbone of the community," he said.

You can watch the full debate here.

Ukraine's richest man filed a lawsuit against Russia at Europe’s top human rights court on Monday, seeking compensation over what he has said are billions of dollars in business losses since Russia's invasion.

What's the impact of a Russian debt default?

Russia is poised to default on its foreign debt for the first time since the Bolshevik Revolution more than a century ago, further alienating the country from the global financial system following sanctions imposed over its war in Ukraine.

Over 1 million U.S. voters switch to GOP in warning for Dems: AP report

A political shift is beginning to take hold across the U.S. as tens of thousands of suburban swing voters who helped fuel the Democratic Party's gains in recent years are becoming Republicans.