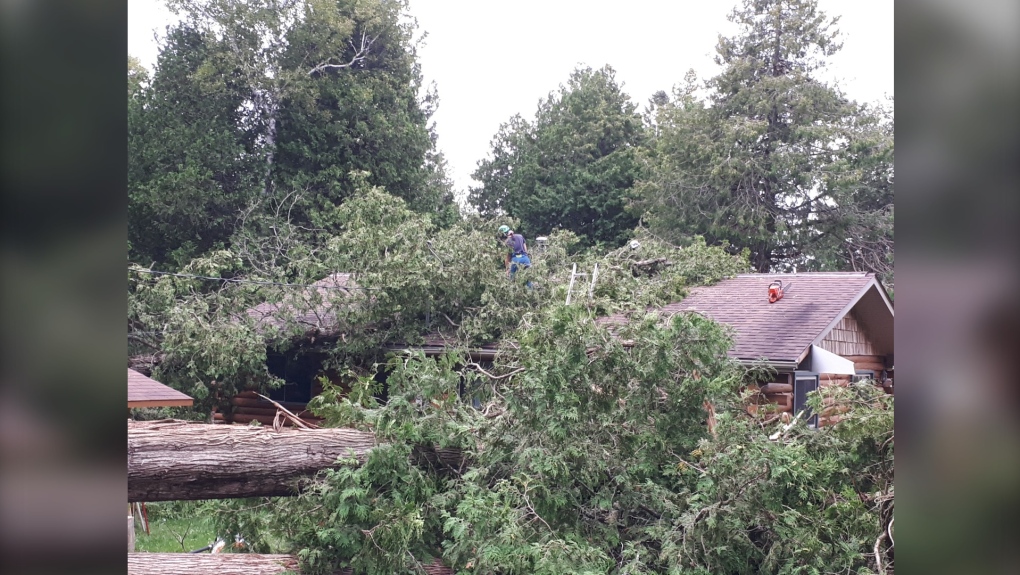 David and Debby Thomlinson provided CTV News with a series of photos showing the extent of the damage on their property caused by strong winds with toppled and split trees. (Photos provided by David Thomlinson)
SUDBURY -

A wicked storm ripped through the northeast yesterday evening with reports of a possible funnel cloud in the area. The damage caused by strong winds extends from Elliot Lake all the way to the Sault Ste. Marie area.

The City of Elliot Lake’s chief administrative officer, Dan Gagnon, says there is evidence of significant property damage throughout the area.

Gagnon says the community was hit by heavy rain and strong winds and at one point, trees couldn’t be heard snapping like match sticks.

Signs were damaged, fascia on homes was also ripped off or barely hanging on. City crews were busy cleaning up the mess Thursday and Gagnon says the storm also knocked out power to the entire city.

In fact, hydro one crews are still working to bring electricity back online to some homes.

David and Debby Thomlinson provided CTV News with a series of photos showing the extent of the damage on their property caused by strong winds with toppled and split trees.

The Thomlinsons and others on the island are now working to clean-up the mess the storm left behind.

CTV News has been advised that Algoma Power is still working to get electricity back on. But it could take another three to four days for that to happen.

There are also reports of a possible funnel cloud touching down in the area southwest of Richards Landing on St. Joseph Island, however, CTV News could not immediately confirm.

A group of researchers tracking tornadoes in the area say they are investigating and will review satellite imagery.