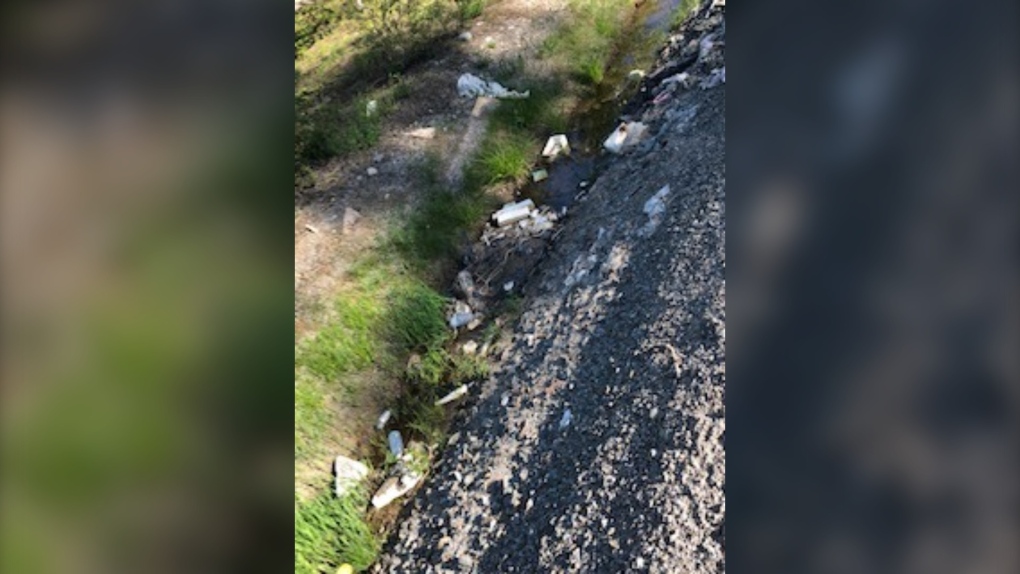 After receiving numerous complaints, the Timmins Police Service is reminding residents they could be charged and face hefty fines for not throwing their trash away properly on Pine Street South. (Supplied)

SUDBURY -- After receiving numerous complaints, the Timmins Police Service is reminding residents they could be charged and face hefty fines for not throwing their trash away properly.

In a news release Wednesday, police say they have received "persistent and numerous complaints in regards to the either willful, or careless, littering affecting the area leading to the city’s waste management facilities on Pine Street South.

"This issue focuses on the overwhelming amounts of garbage, refuse, and household waste items that are being discarded in the ditches along the section of Pine Street South commencing at Evelyn Crescent and onward to the entrance of the city’s landfill site itself," the release said.

"Of late, there has been a notable and highly visible increase in the amount of garbage and pollutants in these ditches."

The main issue appears to be people heading to the landfill who haven't properly secured their trash load in their vehicle, allowing it to spill out.

"This issue has been particularly noticeable during the recent no tipping fee week," the release said.

A major concern is runoff water flowing over the discarded containers that hold or held toxic and hazardous products in the ditches adjacent to the affected section of roadway.

"These waters will eventually find their way to the Mattagami River," the release said.

Residents in the area have taken it upon themselves to clean up, and while commendable, police said this work is the "result of the carelessness of others."

The Highway Traffic Act outlines significant penalties for these sorts of offences.

"Those motorists found to be in violation of any of these sections of the Highway Traffic Act should not indulge in any naive expectations of leniency in regards to these offences," the release said.

"Significant monetary fines apply to any offences discovered by the Timmins Police Service along with referrals, where warranted, to the Ministry of the Environment."

The relevant legislation in the Highway Traffic Act, the release said, defines littering on a highway: "Every person who throws or deposits or causes to be deposited any glass, nails, tacks or scraps of metal or any rubbish, refuse, waste or litter upon, along or adjacent to a highway, except in receptacles provided for the purpose, is guilty of the offence of littering the highway."

Overhanging load: "Every vehicle carrying a load which overhangs the rear of the vehicle to the extent of 1.5 meters or more while on a highway shall display upon the overhanging load at the extreme rear end thereof at any time from one-half hour before sunset to one-half hour after sunrise, or at any other time when there is insufficient light or unfavorable atmospheric conditions, a red light, and at all other times a red flag or a red marker sufficient to indicate the projection of the load."

Anyone with relevant information about the identify of any violators are asked to call the Timmins Police Service's traffic section at 705-264-1201 or to provide their information anonymously by means of the Crime Stopper tip line at 1-800-222-8477 or by means of www.p3tips.com.