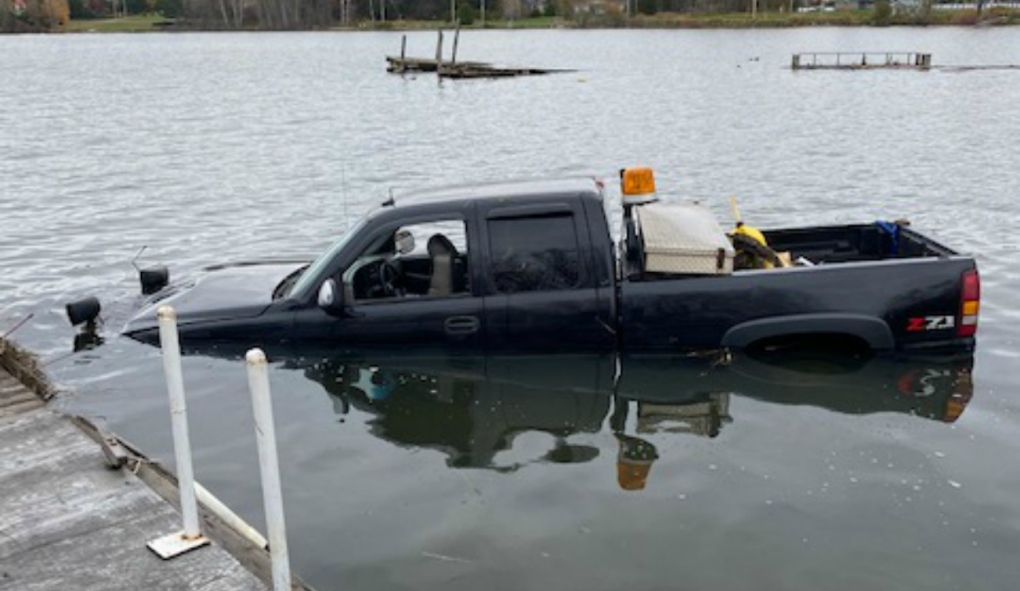 East Algoma Ontario Provincial Police are investigating after this pickup truck was stolen from a hunt camp in St. Joseph Township Oct. 24, then found submerged in Lake Huron Oct. 26. (Supplied)

SUDBURY -- The owner of a pickup truck learned the hard way not to leave your keys inside the vehicle, even when you're parked in a remote hunt camp.

The man was part of a group of people who headed to a camp in St. Joseph Township, about 40 kilometres east of Sault Ste. Marie, Oct. 24. The group was there to close the hunt camp for the season.

They went to bed around 10 p.m. and woke up the next morning to find the 2002 black Chevrolet Silverado gone.

"The Chevrolet Silverado had a plow on the front and a silver box in the rear of truck bed with two lock hitches," East Algoma Ontario Provincial Police said in a news release Wednesday. "Both the driver and passenger windows were slightly rolled down. The driver's side door did not lock. The keys were left in a cup holder-front seat and the driver's seat set back. Various tools, tree stumps and a case of Coors Light beer were in the bed of the truck. A cooler and clothing were left inside the pickup."

The owner followed a set of ATV tracks to 5th Side Road, where they were no longer visible.

On Oct. 26, shortly after 9:30 a.m., OPP responded to pickup truck that was submerged in Lake Huron located behind the LCBO on Richards Street in Town of Richards Landing.

"It was facing northwest in the water," police said. "Both front windows completely rolled down. Front driver's seat was moved slightly forward … The case of Coors Light cans was open. The pickup had damage to the front hood, driver's side running boards and rear tailgate."

Anyone with information regarding the theft of this pick-up is asked to contact police at 1-888-310-1122.

Should you want to remain anonymous, call Crime Stoppers at 1-800-222-8477 (TIPS), submit information online at www.p3tips.com or download the P3 App where you may be eligible to receive a cash reward of up to $2,000.