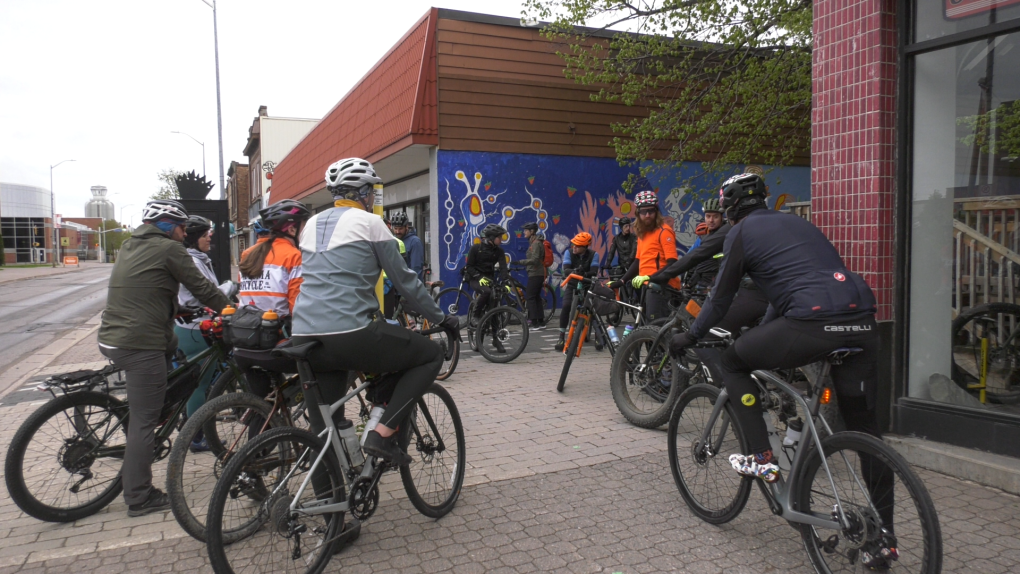 Red Pine Tours held its spring “Ramble” this weekend, with a portion of the proceeds going to the Finn Hill Mountain Bike trail. Mike Mcdonald photo

Red Pine Tours held its spring “Ramble” this weekend, with a portion of the proceeds going to the Finn Hill Mountain Bike trail.

A Sault Ste. Marie tour guide is raising money for a cycling project in the works this summer.

Even though the temperature was barely above zero Sunday morning, cyclists weren’t going to let a little chill get in the way of their expedition.. The Ramble was a 70- kilometre bike ride through downtown streets, bike trails, and gravel patches.

“It’s great to see the support that our city has been giving our cycling community by developing trails up at Hiawatha, as well as giving the go-ahead to Sault Cycling Club for this mountain bike trail system at Finn Hill, and we’re just trying to do our part to help out with that,” said Red Pine Tours co-owner Reg Peer.

Peer’s business partner, Graham Atkinson, said cyclists were itching to get back onto the trails.

“It had been some time before an event like this had been held, and I think people were ready to kind of be social again and get out on some bikes and ride some trails and some road,” said Atkinson.

Brian Blaney, president of the Sault Cycling Club, said more people than ever are taking up the cycling hobby.

“It has exploded. A lot of fresh people from COVID. Just also a growing wave beforehand. People are excited, people want to be on bikes, and people feel like kids again. It’s beautiful,” said Blaney

“It looks like possibly July, we’ll start construction, and admits COVID-19 among other factors, caused a delay in the start of construction. Funding has been amazing,” he said.

The fundraising campaign for the Finn Hill Mountain Bike trail is ongoing, with organizers reaching more than twothirds of the $150-thousand goal.

The Sault Cycling Club anticipates completion before the end of this summer.

Canada will keep ArriveCan for its data on COVID-19-positive travellers: sources

More than 70M people are now in poverty because of inflation: UN

A staggering 71 million more people around the world are experiencing poverty as a result of soaring food and energy prices that climbed in the weeks following Russia's invasion of Ukraine, the United Nations Development Program said in a report Thursday.