'Someone knows something': New play on unsolved 1974 Sudbury art theft 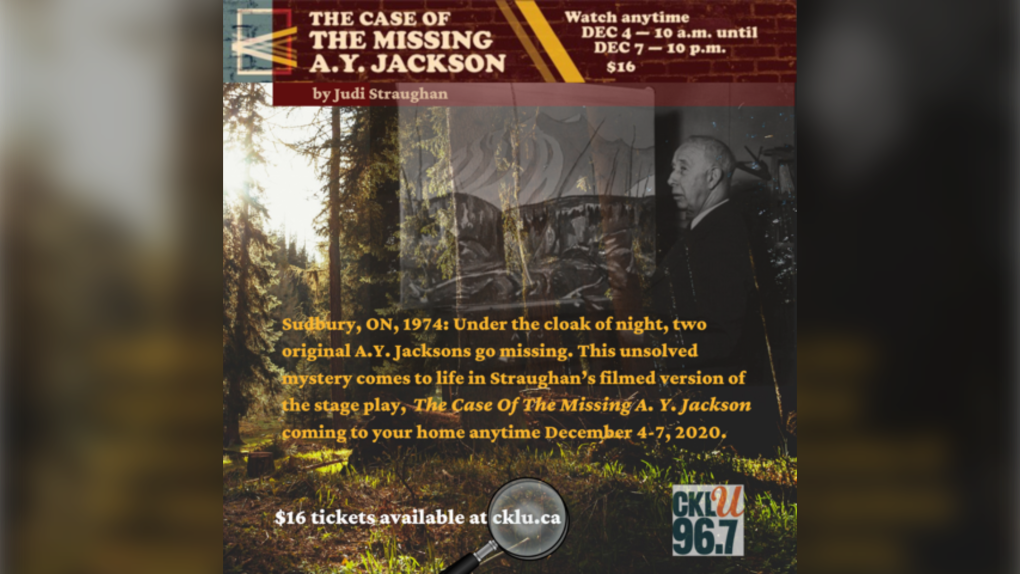 The Case of the Missing AY Jackson, the story of a unsolved Sudbury art theft from 1974. (Supplied)

SUDBURY -- The Case of the Missing A.Y. Jackson brings the unsolved mystery of two highly valuable paintings stolen from a Sudbury high school to life with a new stage play.

"It was a warm summer's night, Aug. 9, 1974, when North Americans were huddled around their television sets bidding farewell to the disgraced Richard Nixon, that crooks of another kind were in motion in Sudbury," said playwright and director Judi Straughan in a news release.

Act 1 of the true crime story based in Sudbury, Ont. examines the events leading up to the robbery, including how two small-town high schools came to purchase paintings from one of the famed Group of Seven and the controversial amalgamation of the two rival schools. In Act 2, Straughan explores several theories that have circulated over the years and includes a fictional solution to the crime.

"With the hundredth anniversary of the first exhibit of the Group of Seven, this is the year to get inquiring minds across the nation to join in on the search for the missing A.Y. Jacksons," said Straughan. "Someone knows something.  Maybe they're ready to talk after all these years."

The two paintings were purchased by the artist in the 1950s. Students of Sheridan Technical School bought Spring on the Onaping River in 1955 after art teacher Jack Smith invited Jackson to paint with his students at the popular Sudbury area falls site.

"Sudbury High School students bought their A.Y. Jackson, A Windy Day Lake Superior, to commemorate a beloved teacher who had been murdered one school lunch hour.  That's a part of what makes this entire story so incredible," said Straughan. "It's a mystery that sounds like it was ripped from the pages of True Detective magazine. Surprisingly, there's even a murder on the periphery of the story."

Due to COVID-19 restrictions, the play is presented as a staged radio drama which was recently filmed in front of a limited live audience at Sudbury Theatre Centre and will be streamed online Dec. 4-7.

The cast includes over a dozen current Sudbury residents, playing versions of the real-life students, principal and detectives that make up the story. Several of the people portrayed in the play and their families were in the audience during filming.

Forty-six years later, the investigation remains open. If you have any information about the theft of the paintings or any other crime, you can give an anonymous tip through Crime Stoppers at 1-800-222-8477 or online.

The show is a fundraiser for Laurentian University's campus radio station CKLU 96.7 FM.

To order your ticket and watch the show online click here.