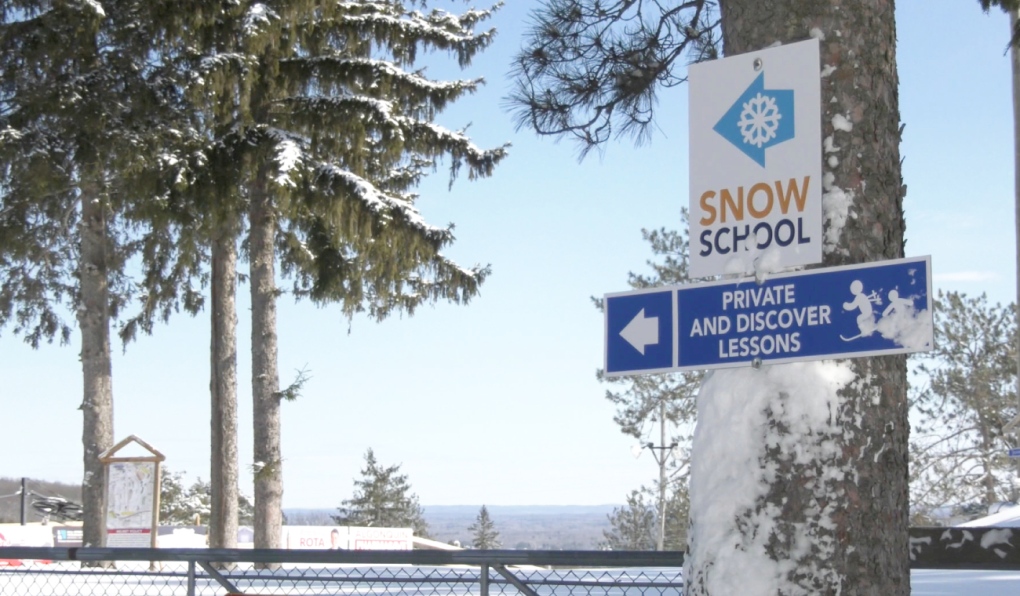 Laurentian Ski Hill in North Bay remains closed although many hills across the province have opened, but with some amenities reopening in the city, people still have the opportunity to get outside. (Alana Pickrell/CTV News)

NORTH BAY -- With milder temperatures and many ski hills finally open, people across Ontario are back on the slopes. However, Laurentian Ski Hill in North Bay remains closed, but is hopeful the government will give it the green light on March 8.

Several ski hills across the province opened earlier this month in areas allowed to emerge from the shutdown order.

“Majority of the hills in the province are back and welcoming skiers and snowboarders so that’s delightful,” said Ontario Snow Resorts Association president Kevin Nicol.

“We’re still obviously implementing lots of measures to ensure people follow the rules around physical distancing and mask wearing and all the protocols that are in place, but when the sun comes out and the snow is perfect, it’s great to see smiling faces again.”

Overall, Nicol said the openings have been a success with no major issues or concerns to note. However, the delayed opening isn’t the only change for this season.

Lots of controls in place

“We were able to get reinstated as a recreational amenity in stage 1, so in grey,” he said. “So we’re allowed to operate, but again it’s very limited in that category. Where it’s basically just skiing and snowboarding and washrooms available inside and that’s about it. Food and beverage is takeout and tickets are all advance purchase ... There’s lots of controls in place.”

This is something that has been implemented at Laurentian Ski Hill as well, where they are hoping the effort wasn’t for nothing.

“We’ve invested heavily in COVID-19 PPE for our staff and for our guests and that sort of thing,” said King. “I’d just hate to see that all go completely to waste.”

Right now, Laurentian Ski Hill is hoping it will be allowed to open March 8, however, in regular years that's usually when the season starts winding down. That's disappointing, King said.

“We’re disappointed as a ski hill, but we’re also disappointed as skiers and snowboarders and members of the community who would just like to get out and get some fresh air,” he said.

“There’s a lot of pent up people waiting, you know, been waiting a long time to try and get out on the hill and I think we’re going to be busy even if we open for, you know, the beginning of March.”

With the late opening, weather will play a huge role in how much of a ski season people get, if any.

“Maybe what we’ll end up doing is pushing our season, if Mother Nature allows us, into April past Easter,” said Nicol.

“It’s still worth it to open up and get out skiing … When you think about how we operate, early in the season is usually the most extensive part of the season for ski area operators as they bring staff on and make the snow and get ready for the operation. That was all done, as per normal, early December. Late November to get up and running before we were closed. So a lot of that financial outlay and effort had already been spent so at least in this regard we’re able to take advantage of all the effort and welcome people back.”

At Laurentian Ski Hill, King says roughly 1,200 people bought a membership this year. The hill extended its membership policy, giving people the chance to return their season passes if desired. They also had the option to take a credit towards next year's membership. King said most people are hanging onto the hope that the hill will open this season.

City staff began preparing rinks on Monday, the first day the activity was allowed in North Bay. The city has stated that physical distancing and mask wearing is mandatory, there is a capacity of 25 people and it’s based on a first-come, first-served basis and change rooms and washrooms are not available. Officials have said these rules must be followed in order for the activities to remain open.

“It doesn’t matter if we are in or out of the response framework, if we have evidence of large groups of people together, not following COVID-19 public health protocols, I will close the activity,” said Dr. Jim Chirico, medical officer of health for the North Bay Parry Sound District Health Unit.

“These activities are only allowed to be open if stringent protocols are in place and are followed.”

As of right now, it's unclear whether North Bay will remain in shutdown past March 8. Chirico said it's “too early to advocate either way for a decision.”