A solemn service was held on the shores of Horne Lake on Thursday morning as a small contingent of Elliot Lake residents marked 10 years since a tragedy that shocked people across Canada.

On June 23, 2012, the Algo Mall collapsed in Elliot Lake, killing two people and injuring another 20. Killed in the collapse were Lucie Aylwin, 37, who was working in the mall lottery booth, and Doloris Perizzolo, 74, who was her customer.

A class-action lawsuit related to the collapse is still before the courts.

Celestine Blanchard was a server at Elliot's Not Here, a restaurant inside the mall, when the tragedy occurred. She initially thought the noise was coming from a television outside the restaurant.

"So I went out there to check and it wasn't that so I turned around to walk away and I heard 'whoosh,'" Blanchard said.

She could feel a surge of air and dust on her back and heard what sounded like a "train, but 10 times louder," coming through the mall.

"I knew it was happening. I thought it would go like a domino effect from Zellers and that I would have a few minutes to get people out," Blanchard said. "So I turned, ran into the dining room and said everyone follow me to the back."

The mall was dark, so people grabbed on to the person in front of them as Blanchard led them to the exit.

"You could smell gas," she said. "I got to the back door, pushed on the back door and I could see the sunlight and said 'thank you God.'"

She was so focused on getting customers out it slipped her mind that her husband was still in the mall.

They were reunited 10 minutes later, but Blanchard said it was the longest 10 minutes of her life.

Looking back, she still gets emotional at the loss of Aylwin and Perizzolo, both of whom she knew.

"I know Doloris' daughter and son-in-law and these people have suffered so greatly that my heart breaks for them daily," she said, tearing up.

"I see what they've gone through. This will never be over for them. This is so painful." 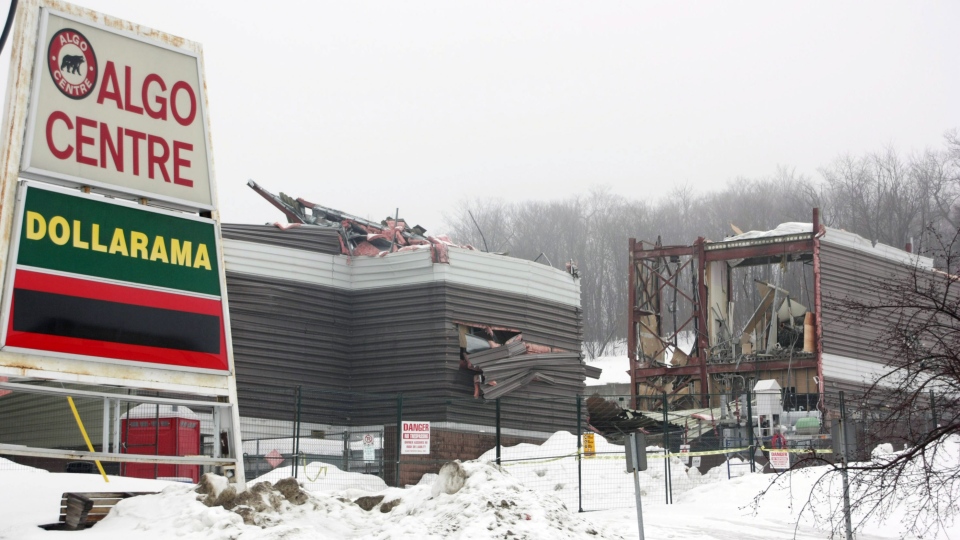 Blanchard says it's been painful to watch the families of the victims, forced to live their lives without their loved ones.

"It's so painful to watch a woman miss her mama so much," she said through tears.

Mayor Dan Marchisella laid a wreath on behalf of the city and spoke at the morning ceremony. Perizzolo was a part of Marchisella family. They were so close that he called her 'Aunt Doloris.'

"Doloris was a close part of our whole family growing up, my whole life," said the mayor.

Marchisella had just moved back to Elliot Lake at the time of the collapse and bought a house. He returned to Petawawa to deal with some business when he heard about the collapse through colleagues and the news.

"I was kind of in disbelief because I was just in there (the mall), five hours earlier," he said.

The inquiry into the disaster was held, but Marchisella said justice wasn't served.

"Everybody wants to see some form of justice when there is a tragedy like this," he said. U

"Unfortunately, millions of dollars was spent on an inquiry that … and pointed the finger all over the place. The reality comes down to engineering work had been done and the engineer signed off on the safety but they're somewhat indemnified the day they do the work."

The property at 151 Ontario Ave., where the mall was located, now belongs to the city. Council has been working to turn it into a sports complex since 2019.

Elliot Lake is still waiting for provincial funding in hopes of being able to build the complex.

Another ceremony was held around 2 p.m. to coincide with when the tragedy took place. Marchisella laid a second wreath on the old mall site.

Among the survivors in attendance was Anna Hamernick, who attended for the first time since the tragedy took place. Hamernick said the memory of what she heard and saw that day still keeps her awake.

"I still can't sleep well," she told CTV News. "It was like a bomb and it just came down in such a narrow path."