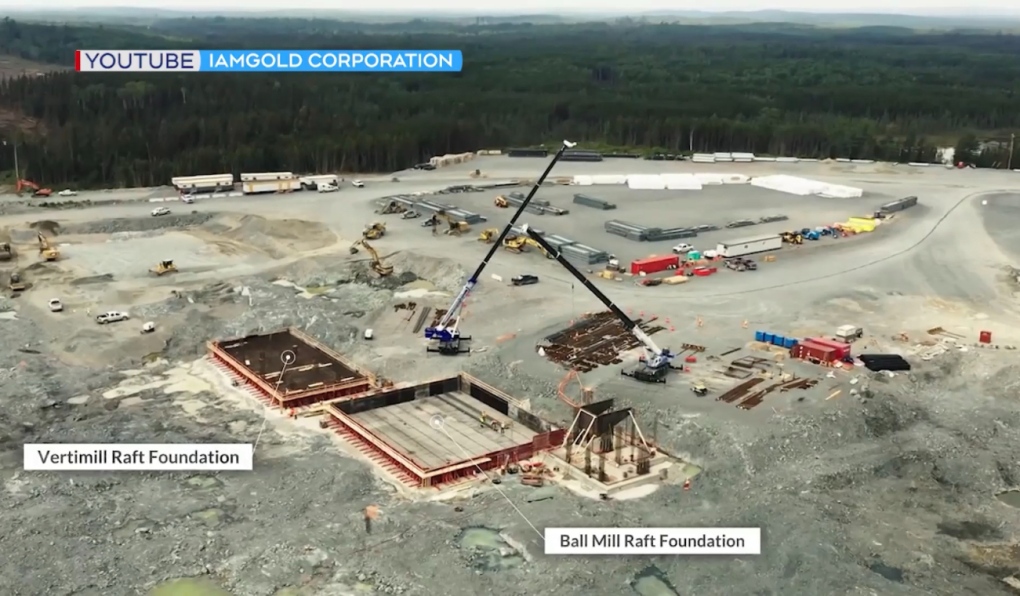 Surging global inflation is among the factors causing major problems for IAMGOLD's plans to develop a massive gold find about an hour south of Timmins. (File)

Surging global inflation is among the factors causing major problems for IAMGOLD's plans to develop a massive gold find about an hour south of Timmins.

The company is building the large-scale Côté Gold project on the property, which it acquired in 2012.

Construction began in 2020 and was expected to take three years and cost the company around $900 million. The lifespan of the mine is expected to be 16-18 years and produce 495,000 ounces of gold a year in its first six years. Average production over the full 18 years is estimated at 365,000 ounces a year, starting in the fourth quarter of 2023.

However, rising costs and other challenges recently pushed back the opening to early 2024. IAMGOLD's share of the remaining costs to complete the project have soared from $750 million to an estimated $1.3 billion.

Further adding to the challenges is turnover of company executives. Chief financial officer Daniella Dimitrov left her position at the company Sept. 16, and is being replaced by the company's current vice-president of finance, Maarten Theunissen.

Dimitrov was named interim CEO when Gordon Stothart stepped down from the post in January. However, a major investor in the company, Resource Capital Fund VII, issued an open letter in February criticizing how the company was being run and calling for major changes to its board of directors.

"We have lost all faith in the current board during the past two weeks of our engagement," the letter said.

"Our attempts to reach a cooperative framework have been met with a pattern of disingenuous interactions. We no longer trust the current board to make any material decisions on IAMGOLD's future leadership that reflect the best interests of its shareholders."

The letter was also critical of the appointment of Dimitrov as interim CEO.

"The board does not have the credibility to attract and retain an appropriate turnaround CEO, nor to manage a strategic review and any consequential asset sales," the letter said.

"The most recent (interim) CEO appointment of Ms. Dimitrov is case in point and follows a predecessor that was another internal appointment who lasted less than two years with scant achievement."

IAMGOLD agreed to appoint three new members to the board -- Maryse Bélanger, David Smith and Ian Ashby – with Bélanger replacing Dimitrov as interim CEO in May.

"We would like to thank Daniella for her commitment and dedication to IAMGOLD and wish her the very best in the future," Bélanger said in the announcement.

"Maarten is an extremely capable and experienced finance professional and I am looking forward to working directly with him as we continue to advance the financing plan for Côté."

Last month, Bélanger said the revised cost estimates gave the company a much clearer picture on what is required to complete the project.

“Coté Gold is a project that is being advanced in an environment with significant headwinds, including COVID-19, inflation and other global events – and their impacts on global supply chains, labour availability and the associated costs of doing business,” she said in a statement.

"Given the importance of Coté Gold to achieve our goal of becoming a leading high-margin gold producer, we are actively pursuing various alternatives to increase liquidity to complete construction and deliver Coté on the updated schedule."

'Not looking for a fight' but nothing off the table when it comes to Alberta sovereignty act: PM Trudeau

Prime Minister Justin Trudeau says that while he's 'not looking for a fight' with Alberta, the federal government is not taking anything off the table when it comes to how it may respond to Alberta Premier Danielle Smith's new 'sovereignty act.'

A massive Ontario-wide investigation into child exploitation has led to more than 100 people being charged, police announced on Wednesday.

The largest earthquake ever recorded in Alberta, which rattled homes and nerves Tuesday, was probably due to natural causes, says a geologist.

Statistics Canada says there were 2.8 million fewer commuters in 2021 than in 2016, as the pandemic drove a shift toward remote work.

Danielle Smith has gone straight from the political altar to a divorce from common sense – and her out-of-the-gate antics suggest she could soon claim the title of Alberta's briefest premier, Don Martin writes in an exclusive column for CTVNews.ca.

In the wake of southern B.C.’s first major snowstorm of the season, more than 100 schools in Metro Vancouver and the Fraser Valley are keeping their doors closed Wednesday.

A member of the Royal Family's household has left her role after making 'unacceptable and deeply regrettable' comments about race and nationality to a woman at a grand reception at Buckingham Palace, a spokesperson said on Wednesday.

Not to be a Debbie Downer but Canada will be without some iconic snacks for the foreseeable future after Little Debbie was forced to pull its sweet treats from store shelves across the country.