SUDBURY -- Environment Canada has issued snowfall and winter storm warnings for several communities in northern Ontario Monday, some areas could see up to 35 cm of snow.

The weather alerts are in effect for communities west of Thunder Bay to the Quebec border and James Bay coast as a snowstorm moves east across a portion of the north.

Heavy snowfall is expected to begin late Monday afternoon and continue into Tuesday with snowfall amounts up to 20 cm. Communities around Lake Nipigon will likely see the highest amounts of snow, possibly up to 35 cm.

"The snow is expected to become heavy at times tonight as temperatures fall rapidly and winds increase. Snowfall rates of a few centimetres per hour are possible at times," Environment Canada said. "This snow will continue into Tuesday but should slowly taper off as the day progresses. Snowfall amounts in the 15 to 20 cm range look likely."

Visibility will be reduced with "strong northerly winds gusting up to 50 km/h resulting in some blowing snow, particularly over open areas." Wind gusts could reach up to 60 km/h in the James Bay coast areas, as well as Hornepayne, Manitouwadge, Marathon and Nipigon.

"Moosonee is the on the northern edge of this weather system and any southward shift in the track of the system may reduce snowfall amounts," Environment Canada said.

Travel on Highway 11 will be hazardous due to blowing snow.

"Conditions should improve by (Monday) afternoon for areas northwest of Lake Superior and later in the day for areas farther east," Environment Canada said.

"Snow will develop this morning and may fall heavily at times during the day with amounts of 10 to 15 cm possible, especially away from Lake Superior," Environment Canada said. "Travel along Highway 17 and other area roads will likely be hazardous. Motorists are urged to exercise caution. Conditions should improve (Monday) evening."

Communities further from Lake Superior could see snow accumulation between 20 and 35 cm. 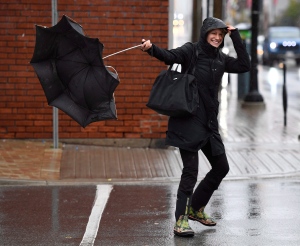