TIMMINS -- For the community of Holtyre in Black River-Matheson Township, brown water has been a decades-long concern that residents have been imploring town council to solve. 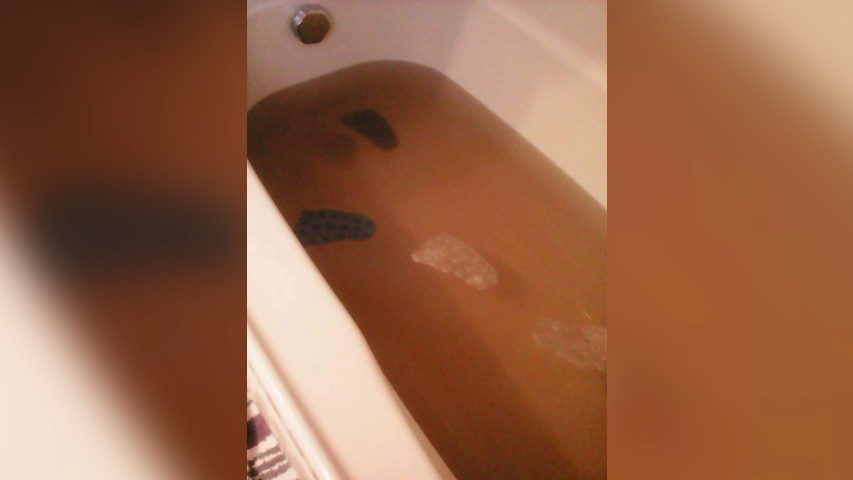 Black River-Matheson's town manager, Chris Wray, said the water system is outdated and wasn't originally created with the knowledge or intention of removing minerals and metals. The town has made upgrades to the system over the years, Wray said, but it hasn't completely solved the issue. (Photo Courtesy of Bree Allen)

But despite gathering petitions and taking people's concerns to local officials, Allen feels the township isn't taking the small community seriously and doesn't believe the water is as drinkable as council insists.

"We need safe drinking water in town and something that's appealing," said Allen.

"I don't want anyone else to have to bathe their newborn in brown water."

Allen only drinks bottled water and regularly buys filters for her home's water source to make it more comfortable to bathe in and cook with.

Even then, she said she's had to replace several dishwashers, sink faucets, bathtubs and a hot water heater, due to the buildup from the water's contents.

Testing determined that high levels of the metal manganese in the local water source reacting with the town's chlorine treatment is causing the discolouration but town officials maintain that the water is up to provincial health standards under the Clean Water Act.

But for Chantal Rondeau, who has lived in Holtyre for at least 30 years, she said other areas in the township have access to clear water and so should her community.

"We pay taxes like everybody else and we should have the same water quality," said Rondeau.

"Everybody else in the township is paying for the same thing but they're getting better water than we are."

Black River-Matheson's town manager, Chris Wray, said the water system is outdated and wasn't originally created with the knowledge or intention of removing minerals and metals. The town has made upgrades to the system over the years, Wray said, but it hasn't completely solved the issue.

In addition to frequently flushing the system, he said, more discussions need to be done with its water operator, Ontario Clean Water Agency, to determine additional options.

Anything from more advanced filtration, to water softening, to finding a new water source could be on the table, Wray said, but it's not a simple decision.

"These options are very expensive and so the township's going to want to ensure that it has the best value for the (taxpayer's) money and also that the solution is going to be one that we really need," Wray said.

"There is concern and we want to get this thing out of the way."

That's more than is technically required of the municipality, according to the Canadian Environmental Law Association's executive director, Theresa McClenaghan. As long as municipalities maintain the province's health standards, she said, aesthetic regulations are less strict and allow a higher level of metals and discolouration without impacting safety.

Therefore, while it adds additional expenses, she said softening the water supply is typically each homeowner's responsibility.

"A lot of people will put in home systems to deal with softening the water," said McClenaghan, noting that she also experiences hard water issues at her home in Brant County.

"People can go through their appliances a lot faster here because of the hard water."

If a municipality does decide to improve the ‘hardness’ and appearance of its water, she said, deciding on a filtration method or locating a different water source needs further health considerations.

For example, McClenaghan said, surface water sources could have softer water but is often more susceptible to contamination from rain runoff and would therefore require more aggressive water treatment.

Conversely, she said, ground water will likely have less contamination but more mineral and metal content that will give it discolouration.

To combat that requires softening methods that experts argue have a negative environmental impact.

Aside from what's required by law, McClenaghan said, it's up to the relationship between government and the public on how water systems are handled. But she encourages communities to have that open discussion.

"These are decisions being made by public staff, public councillors and they're being made on behalf of the whole community, so people should really be involved."

That's something Allen said she has been pushing for but feels her township has too much bureaucracy, where council meetings are concerned, to facilitate those public discussions.

Allen took the Holtyre community's concerns to council in June 2019 but felt that town officials were unsympathetic and unwilling to have a proper conversation on the topic.

Mayor Laderoute had said that council would consider purchasing a new filtration system but according to emails between he and Allen, had to halt that idea to deal with the COVID-19 pandemic.

Moreover, Allen said she feels the town's readiness to spend money on Matheson's waterfront and purchasing a new municipal building indicates the township is not prioritizing the wants of its smaller communities.

"The township seems to be focusing on Matheson and being the heart of the community and forgetting about its outlying towns that also serve the community," Allen said.

"We just don't reap the benefits of the dollars that we put forth for the services that we receive."

'We just need to work together'

Wray stresses that that is not the case and said council will discuss possible next steps to improve Holtyre's water system with the Ontario Clean Water Agency at its regular council meeting on Nov. 10.

In a release, Black River-Matheson stressed that it “remains transparent on this and all municipal issues” and encourages people to reach out to town officials with questions.

But Allen said for her to feel the township is working in Holtyre's best interest, it needs to include community members at the table.

"We just need to work together with the township and find a solution for this, so that when I go to a council meeting with a jug of water from my house, that council members will drink it," Allen said.

"I would hate it if, at the end of the day, I have to sell my house and leave town because the township won't do anything about the water."