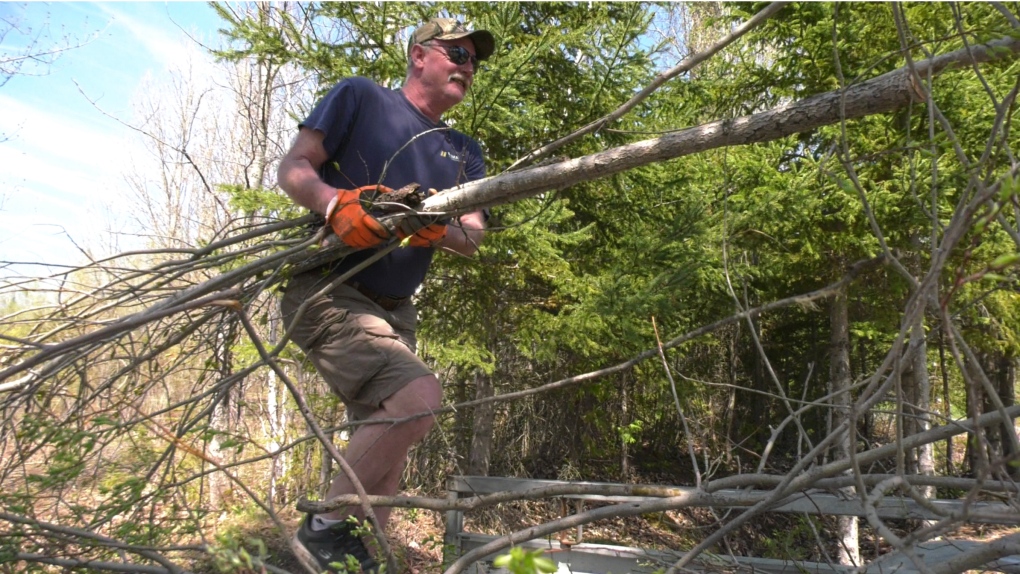 Several Schumacher Lions Club members, challenged by the hot weather, took on the task of clearing brush at the park that bears its name. (Lydia Chubak CTV News Northern Ontario)

The Schumacher Lions Club has twenty-eight members to help tidy its park.  And, if they want to keep their name on the sign, a deal they have with the city of Timmins, which owns the land, has members doing their part by maintaining the park.

They said they're okay with that because doing this for the city of Timmins makes them feel good.

"This was a beautiful park. We lost it all. With the amalgamation they put in that four lane highway, we lost everything, tore everything down. So we’re trying to restore some of this and bring Schumacher back on the map," said Mark West, co-chair of the Schumacher Lions Club Park committee.

The Lions are also known for serving the community with organizing fundraisers to help people in need.

Food vouchers at Christmas, bursaries for students and assisting the local hospital foundation are onlu some of the services they provide in the community.

But most of the men doing the heavy lifting are in their seventies who say they could use a helping hand.

“If we could only get a few more guys that want to be here and do stuff," said Danny Ansara, co-chair of the Schumacher Lions Club Park committee.

"It’s ok to wear the T-shirt and come out for a supper, but you know, the Lions Club is a lot more than that. It’s pitching in. It’s serving. We serve the community. This is what we do,” Ansara said.

Due to the pandemic, the organization has been relatively quiet.  Its big fundraisers didn't happen; its online 50-50 draws paled in comparison to other charities' jackpots; and now it's unsure about the future since the city expects it to pay rent on a hall that was closed due to COVID health restrictions.

But the Schumacher Lions continue to persevere.  They say they're working with the city and other community partners such as Newmont, and the Schumacher Arts Culture Association to bring more improvements to the park.

They include a waterfront project. And, they’re also looking forward to hosting six-outdoor concerts this summer.