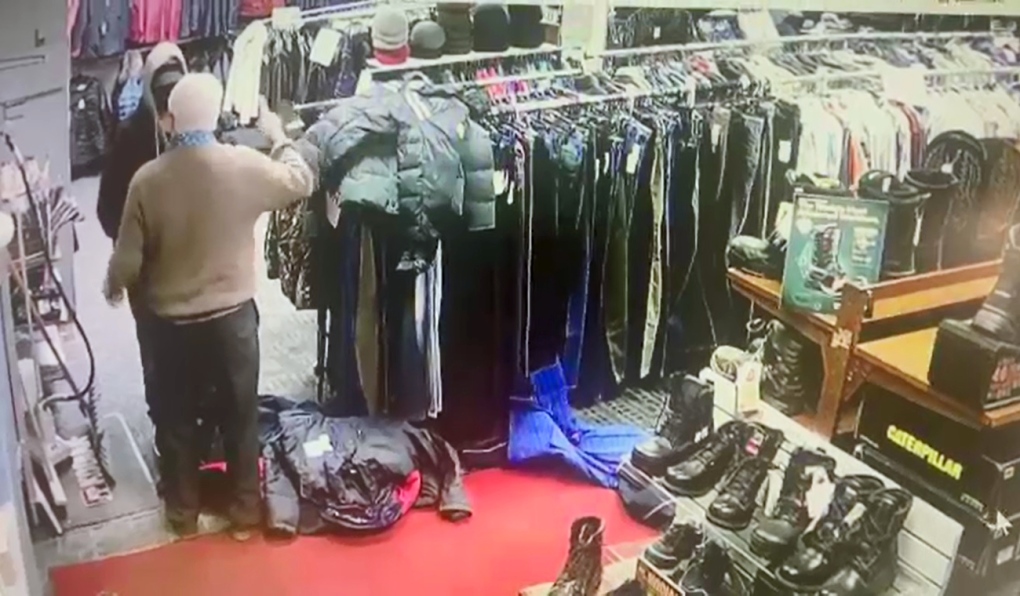 SAULT STE. MARIE -- A clothing store in Sault Ste. Marie is looking to bring more attention to ongoing property crime in the city.

H.R. Lash is selling T-shirts with its name on it and a slogan reading “F@#k around and find out!” It makes light of a scary situation at the store in December.

“I was working in the store by myself when a man walked in and went straight to the back,” said Herbert A. Lash, former owner of the store. “I went back there and asked if he needed any help, but he told me to get lost.”

Lash said he suspected the man wasn’t inside to shop. It’s why he locked the front door, called police and his son, Herbert J. Lash.

“The guy pulled a big duffle bag out of his jacket,” Lash senior said. “He started stuffing Canada Goose coats into it and tried to leave, but couldn’t get out because I locked it.”

Lash senior said he confronted the man, who he believed was shoplifting, and an altercation ensued.

Put suspect in a headlock

“He tried to get out the door, that’s when I grabbed him, we both went down, I hit my shoulder, tore my rotator cup,” he said. ”But Herb, he was able to open the door, jump on his back, put him in a headlock.”

Security footage in the store shows the pair restraining the man until police arrived.

But Lash said police eventually let the man “go home,” with the value of items retrieved under $5,000.

Bill C-75, a police reform bill passed by the federal government in 2019, has come under fire by police services for changes to its bail system. Those changes, according to police, make it more difficult for officers to hold offenders in custody as they await pre-trial hearings, which police criticize for allowing repeat offenders back onto the streets.

“There are positive elements to the bill, but it is greatly reducing the deterrent value of the law,” said Sault Police Chief Hugh Stevenson in a statement. “We need greater authority in the bill to allow us to hold offenders, bring them before the courts and to mandate treatment. This trend will not change without significant efforts to address the mental health and addiction issues many in our community are facing.”

“The idea behind the T-shirts was to take the video and the response that we get from the video and build it into something positive for the business community,” he said. “A lot of times, we don’t have that kind of support.”

Lash Jr. said part of the proceeds will go to purchasing security cameras for another store nearby.

“I always worry about that, if I might not be able to come,” he said. “But there’s not been a single instance that I have not been able to show up before the police show up and be able to handle things.”

H.R. Lash has tried to get a meeting with Sault MP Terry Sheehan to address amending or reversing Bill C-75.