SAULT STE. MARIE -- Since overnight summer camps in Ontario have been cancelled, organizers with Rainbow Camp in Sault Ste. Marie are creating news ways for 2SLGBTQ youth to connect this summer.

Rainbow Camp is an overnight summer camp located in Echo Bay, Ont., just outside of Sault Ste. Marie. It’s for lesbian, gay, bisexual, transgender, queer, two-spirit and allied youth and their siblings. This was supposed to be the 9th summer the camp was in operation, however, like all overnight summer camps in the province, it has been cancelled this year due to the pandemic.

Each summer, participants say their week at camp is the only time they feel accepted in their life. So organizers knew they had to find a way to offer programming to all of the youth who would normally attend.

"It’s the connections that they make that are the most valuable to them and so we had to create something to give them a platform to still have that safe (space)," said Stephanie Voyer, camp director. "Even if they don’t want to participate, not going to do it, participate in anything, but knowing that could talk to someone who is just like them."

This year the camp is hosting a month of online sessions.

Campers will be able to participate in the events that they would normally do in person at camp but from the comfort of their own home.

“So, R.O.C stands for rainbow online connection. We didn’t want to do Rainbow Camp online or anything like that because it’s not camp; it’s not comparable to camp. It’s something totally different," said Voyer. "It’s an online platform that is staff-led and staff-developed, and safe for our 2SLGBT youth and other 2SLGBT youth from all over the world."

If they reach their goal, officials say that number will turn into $40,000 thanks to a generous donation. "We have an anonymous donor who is doing a match and grant. So, if we can raise $20,000, we will actually receive $40,000," said Harry Stewart, president of Rainbow Camp.

Comedian Colin Mochrie and singer Jann Arden are both offering the chance to win a private Zoom call with them to anyone who donates more than $1,000 to the camp. 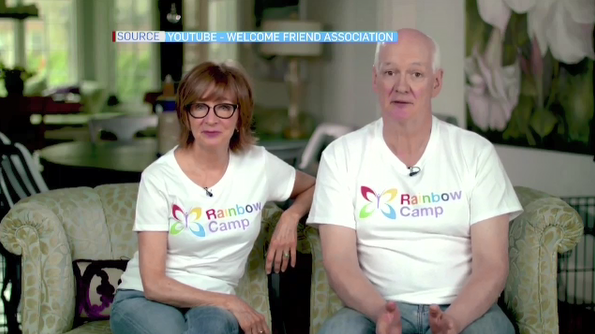 Each year, hundreds of youth from around North America attend. This year, a young person from Japan had signed up to come to camp, and will now be taking part online.