A jewellery store owner in Sault Ste. Marie has launched a new line that will raise money for local cancer care units and will allow survivors to remember an important milestone signalling the end of treatment and the beginning of recovery, ringing the bell.

David Poluck, the owner of Luray Gems - Northern Jewellery, said he has lost family members to cancer and has seen others survive. He said this initiative was inspired by his personal connection to the disease and by one of his long-time customers.

"I had a customer come in and she was diagnosed [with cancer], but she didn’t think she was going to be able to ring the bell. And then it was one of those things where my dad has rang the bell, friends of mine have had brain tumours, they’ve rang the bell. It got me thinking, I have never seen anything that’s a memento to reach [that] milestone, which is a really big thing," said Poluck.

As a result, he designed two bell charms that will give cancer survivors a keepsake to remember that part of their journey. Both pieces can be customized to reflect the date of recovery and the type of cancer by changing the colour of the gem stone that is part of the design. 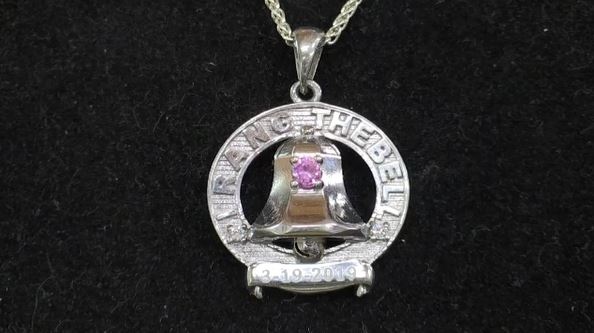 However, this isn’t the first time Poluck has designed jewellery related to cancer. He also created a ribbon ring a few years ago for his sister who died of breast cancer.

"It’s in our family, it’s something we’ve had to directly deal with. But it’s to try to get it to a point where, how can I help to do something? And that’s all it is. It’s maybe not a major thing, but every dollar makes a difference in trying to find a cure,” said Poluck.

A portion of the proceeds from the 'I Rang the Bell' initiative will go towards the Sault Area Hospital Foundation.

Teresa Martone, the executive director of the Sault Area Hospital, said these funds will be used to purchase equipment that is needed in the hospital’s cancer care unit.

"We are incredibly grateful for people like David who take the initiative to come up with new ways to support our hospital,” said Martone. “It’s not uncommon for individuals in the community to reach out to the hospital for a positive experience that they’ve had here. And they can express that passion in many different ways, and a lot of times, it’s money coming into the hospital to support the care that we do. It could be a lemonade stand, it could be sponsoring somebody for a marathon that they’re in, raising pledges, it could be holding a third party fundraiser.”

Martone says the needs at the Sault Area Hospital are endless, as approximately $5-million in equipment needs to be replaced each year. She adds that the hospital relies on donations and fundraising efforts like David’s to meet these needs.

"We have about $50-million in needs over the next 10 years, so we’re constantly fundraising for the hospital to support the work that they do here," said Martone. "While any gift to the Sault Area Hospital Foundation can be designated to a certain fund, we do encourage unrestricted funds that go to the area of greatest need on an annual basis, so the most urgent needs are funded first."

Poluck said he hopes to expand the 'I Rang the Bell' fundraising initiative across Canada and the U.S. by getting more hospitals involved.

'To me, I’ve always taken it from the perspective of the ant. If everybody moves it a little bit, we can build a mountain. And that’s all it is - what can I do to help? Can I prevent it? No. But can I help to eliminate it? Sure," said Poluck.

Bell charms can be purchased on the Luray Gems website and brochures can be found at the Sault Area Hospital gift shop.

$15 from each sale goes towards the Sault Area Hospital Foundation.