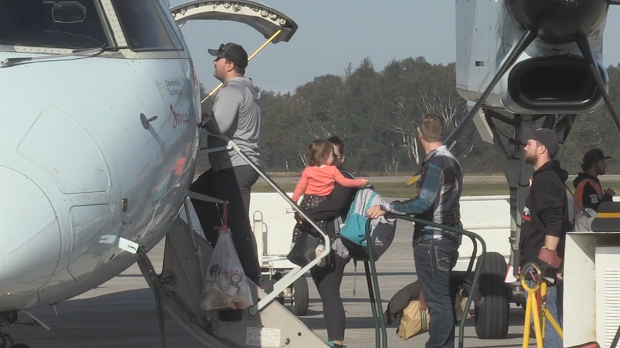 The Sault Ste Marie Airport is hoping to see some federal funding in the New Year for it and other regional airports. (File)

SAULT STE. MARIE -- As we head into a second lockdown due to the COVID-19 pandemic, the immediate future of the Sault Ste Marie Airport is not looking quite as bleak as it did during the first lockdown last spring.

“As far as we know, the airlines are going to keep flying, unlike back in the spring when the lockdown resulted in basically all flights being cancelled,” said Terry Bos, CEO of the Sault Ste Marie Airport Development Corporation.

He added they are hoping to hear soon about federal funding to support regional airports, such as the one in Sault Ste Marie.

“We’re hoping to hear something positive in early January," said Bos. "It’s been a tough slog – we’re down probably $4.1 million in revenue this year.”

“They are critical to the economy in places like the Sault. This is a matter I have and will continue to press with (Sault MP) Terry Sheehan as I know he is actively working in this file.”

Sault Ste Marie Chamber of Commerce CEO Rory Ring said he would also like to see some federal investment in regional airports.

“We’ve always been, through our network across Canada, very strong proponents for the federal government to really support regional airports, because that is critical infrastructure for commerce and for healthcare and supply of goods and services,” said Ring.

Longer term, Bos said he doesn't anticipate a recovery for the airline industry anytime soon. He said it will likely be September before it begins.