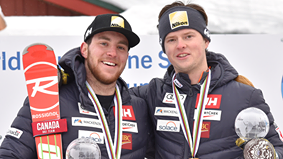 Marcoux was on the podium in Kranjska, Slovenia after competing in the men's visually-impaired category with his guide Tristan Rodgers.

He won the grand slalom race by three seconds.

Marcoux says it was an incredible day.

“Tristan and I are really happy with today’s result. Kranjska has always been a struggle for me, so I’m just excited to be able to put two good runs in the bank,  and be able to carry some good momentum into the rest of the week,” said Marcoux.

“I’ve never really been one to count results, but it is a really cool milestone. Hearing this today, had me looking back on so many good times over the past seven years,” said Marcoux. “I am excited to keep pushing and hopefully land on the box a little more in future races.”

Marcoux spent last year recovering from a back injury.