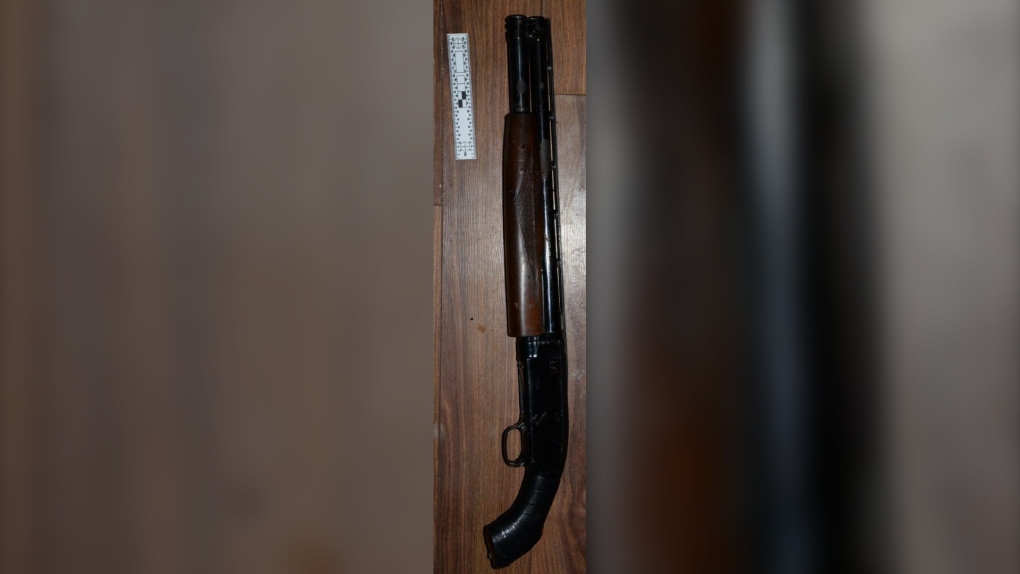 A 65-year-old man from Sault Ste. Marie is facing more than a dozen charges after he accidentally shot himself in the leg earlier this month with this sawed-off shotgun. (Supplied)

A 65-year-old man from Sault Ste. Marie is facing more than a dozen charges after he accidentally shot himself in the leg earlier this month.

It turns out the man was under an order not to possess firearms, and the gun had been stolen from an Ottawa residence.

In a news release Friday, Sault Ste. Marie Police said they were called around 2 a.m. on Jan. 14 to respond to reports of a gunshot on Stevens Street.

"Upon arrival, officers found a victim suffering from a gunshot wound," police said. "They were transported to hospital with non-life-threatening injuries."

Police found a sawed-off 12-gauge shotgun in the residence and determined the man was handling the gun when it accidentally fired and struck him in the leg.

"Further investigation revealed the accused is unauthorized to be in possession of a firearm, and the gun had been previously reported stolen to the Ottawa Police Service," police said.

On Friday, the suspect was charged with more than a dozen offences, including careless use of a firearm, possessing a prohibited weapon, unauthorized weapons possession, possession of a weapon obtained by crime and failure to comply with an undertaking.

He was released on an undertaking and is scheduled to appear in court on March 21.

Thunderstorms kill at least 5, knock out power in parts of Ont., Que.

As the May long weekend kicked off, a massive thunderstorm in southern Ontario and Quebec brought strong wind gusts that knocked down trees, took out power and left at least five people dead.

Russia pressed its offensive in Ukraine's eastern Donbas region Sunday as Poland's president traveled to Kyiv to support the country's Western aspirations and became the first foreign leader to address the Ukrainian parliament since the start of the war.

Croatian police opened fire with live ammunition during clashes on a highway with hundreds of soccer fans returning from a match in the capital, authorities said. Two fans and about a dozen police officers were injured.