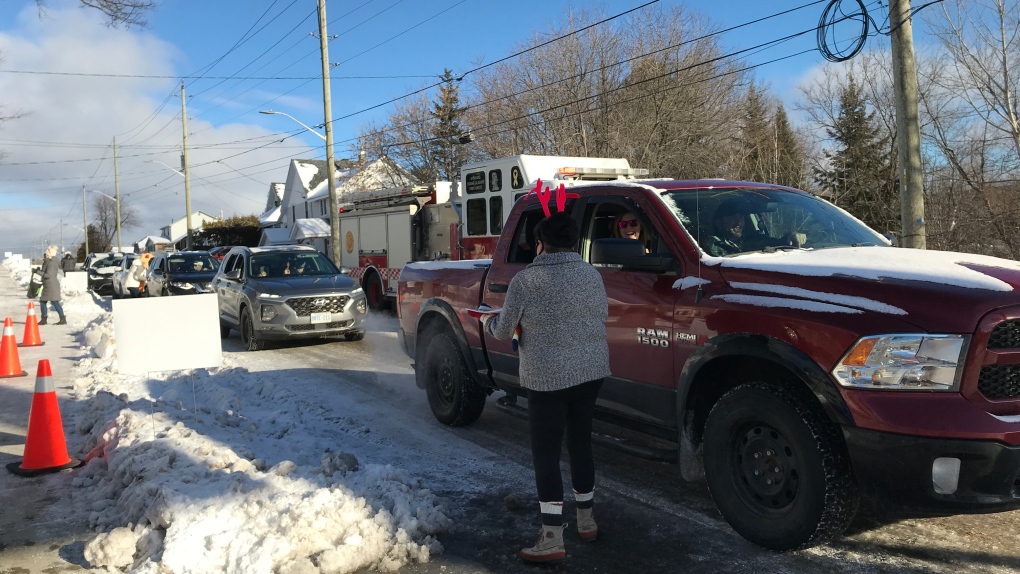 The reindeer might have been absent, but Santa, Mrs. Claus and a team of hard working elves were busy during a three hour drive-by event at The North Bay Food Bank. Dec.5/20 (Alana PIckrell/CTV News Northern Ontario)

NORTH BAY -- There was no shortage of Christmas cheer in North Bay on Saturday with Santa making an appearance at the local food bank.

The reindeer might have been absent, but Santa, Mrs. Claus and a team of hard working elves were busy during a three hour drive-by event at The North Bay Food Bank.

“In the absence of the regular Santa Claus parade, we felt we just had to do something where we were giving back as much as we’re getting,” said North Bay Food Bank Treasurer Mark Deacon.

“We initially thought ‘Wow! We’ll have Santa for the kids,’ but the support from the community today has been absolutely overwhelming.”

The event started at 10 a.m. with cars lined up down the block to participate in the safe and distanced holiday experience.

Candy and other goodies were being passed out to participants and almost everyone who drove through donated to the food bank according to officials.

“I know we’ve broken over 700lbs of donations alone and we’ve been going for barely an hour,” said Cameron Dahr, who has been volunteering at the food bank for half a year now.

“We’re getting a ton of canned goods, like the non-perishables,” he adds.

“But even the non-food items are great to see. It’s the things that people don’t necessarily think about that you need, but a little bit of everything helps.”

Officials say the food bank serves about 300-400 people a month and although Feed Ontario released a report stating that there has been a 10% increase in food bank visits across the province since last September, numbers in North Bay remain steady.

“We’ve seen different sorts of needs, where we need to deliver boxes or people need to have special pick-ups, and things like that. So yea, it’s different this year.”

“The need does tend to increase in Christmas. Normally what really increases at Christmas are the food donations, and this year that’s been a little bit trickier obviously with COVID,” she adds.

“So that’s why events like this and cash donations are really, really helping.”

There wasn’t a set goal for Saturday’s event, the Food Bank was just asking people to give what they could.

“The goal for today honestly, is whatever the community wants to give us, we can use to help the other community members. There’s no set goal,” said Corbett.

“It’s just, this is more of an event to say thank you and give back to the community because they’ve been so supportive during this year of COVID.”

Several other organizations were on hand Saturday including volunteers from Canadore College, North Bay Hydro and North Bay Fire with mascot Sparkey also spreading holiday cheer to cars passing by.

Officials say with many of its regular fundraising events cancelled due to the pandemic, they were happy to find a unique way to help bring in donations.

“Getting donations at Christmas or anytime of the year is essential because the Food Bank is only funded by the community,” explained Deacon.

“So the money will go to an amazing use and the food will literally be going out the door Monday morning.”

Although the drive-by event definitely helped bring in an influx of donations, officials say the more the merrier.

“Even though there’s a lot of donations, this wouldn’t keep us going for more than a week,” said Deacon.

“People are shocked when they find out the volume of food that goes out the door. So that’s why we always have to be doing events like this.”

Although in a different format this year, everyone was smiling and singing along to the Christmas music as they drove by in support of the North Bay Food Bank.