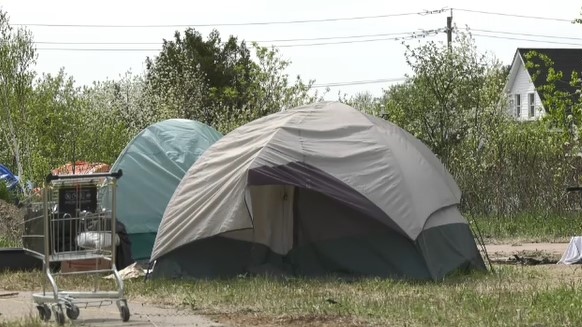 The ‘Homelessness Landscape In The Nipissing District’ report was presented to the social services board Wednesday. The report outlines the spending and operating costs at the low-barrier shelter and the Gateway House. Sept.24/21 (Eric Taschner/CTV News Northern Ontario)
NORTH BAY -

Despite nearly $20 million spent over the last five years to solve homeless issues in the North Bay area, a new report finds the funding has not provided many benefits for those experiencing homelessness.

The report finds that in with the changing landscape and action taken so far, shelter bed supply is not meeting the demand.

“Given the economic circumstance we see in northern Ontario, what we’re seeing on our streets is indicative of what is transpiring,” explained board chair Mark King.

The ‘Homelessness Landscape In The Nipissing District’ report was presented to the social services board Wednesday.

The report also outlines the spending and operating costs at the low-barrier shelter and the Gateway House.

According to the report, the board has invested $2.8 million in developing the low-barrier shelter and Gateway House.

“The low-barrier shelter has accounted for 9.7 per cent ($276,051) of this funding with the Gateway House development accounting for the remaining 90.3 per cent, ($2,562,716).The shelter and supportive housing design and concept is still evolving and under development. Upon completion, this integrated housing with wraparound services and supports will provide 24/7 supports to residents and will focus on life skills,” reads the report.

The annual operating costs at Gateway House are $1.2 million. The cost includes support services which operate 24 hours each day.

It also outlines the so-called ‘turning point’ when it comes to the homeless situation. In the fall of 2019, North Bay citizens were concerned about the amount of homeless people congregating downtown.

“Employment issues, manufacturing closures, all of those different things and the impact of increased cost of living are all playing a part in what we’re watching,” said King.

At the same time, social service members and those on the front lines helping people with mental health and addictions were finding it harder to help clients with complex issues.

Before the pandemic began, the board was spending on average $1.8 million per year for various homeless initiatives. Now it’s up to $7 million annually.

It doesn’t come as a surprise to Chris Brown, who has spent the last few years working to support the homeless community through HOPE’s Outreach. He has seen the spike in people on the streets.

“There are lots of issues. They really kept band-aiding it and now we’re in another pandemic the homeless rate in North Bay,” said Brown. “We had 105 people at one time at tent city.”

The DNSSAB is currently working on the Gateway House project which will focus on transitional housing.

“It will be opening shortly,” King said.

Another report is expected in October which will look at steps to move forward in fixing the homeless crisis.

Pfizer has asked Health Canada to approve the first COVID-19 vaccine for children aged five to 11 years old. It was authorized for people at least 16 years old last December, and for kids between 12 and 15 in May.

The gang that kidnapped a group of 17 American and Canadian missionaries in Haiti has asked for US$1 million each for their release, a top Haitian official said Monday, according to the Wall Street Journal.

Pattie Lovett-Reid: Talking about finances may not be romantic, but is necessary

Having a clear and honest discussion about your financial situation and money mindset before you walk down the isle just seems to make sense, but it isn't always easy, CTV's chief financial commentator Pattie Lovett-Reid writes in her latest column on CTVNews.ca.

Trudeau's visit to Kamloops is 'bittersweet,' Calgary and Edmonton elect new mayors, and parents consider vaccines for their kids. Here's what you need to know today.

After heartbreaking and revealing details about the circumstances of her death were announced to the public, Gabby Petito's parents are finally bringing home the remains of their 22-year-old daughter.