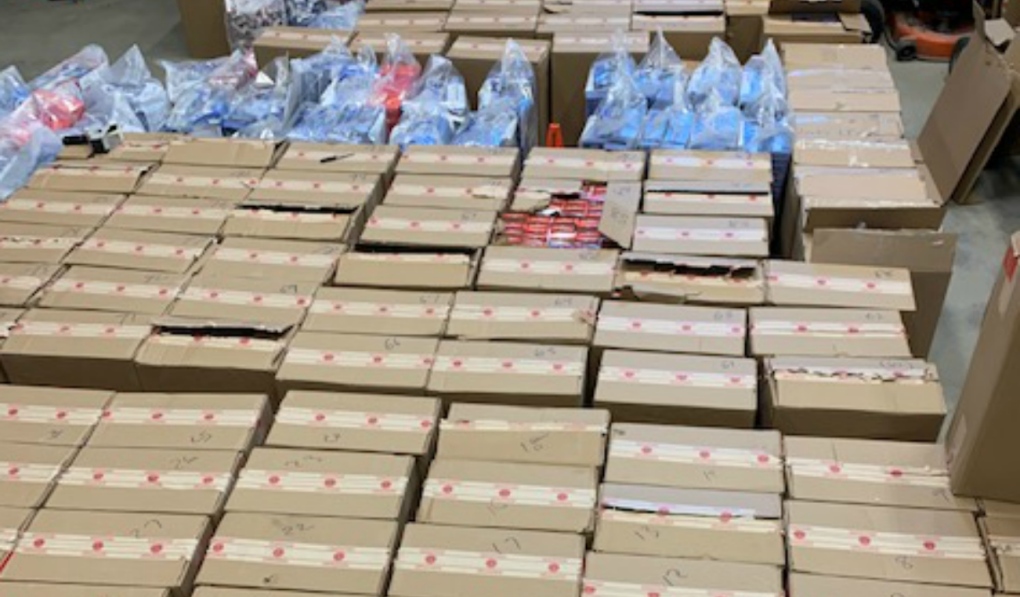 The Ontario Provincial Police released this photo last month of some of the more than 8,000 cartons they seized near Blind River. (File)

SUDBURY -- When a truck crashed into a ditch last month near Blind River, police discovered more than 8,000 cartons of illegal smokes.

Three people from Manitoba were charged, but a news release from National Coalition Against Contraband Tobacco says the incident was just another example of how Ontario is the epicentre for the black market trade in illegal cigarettes.

The coalition said the average market share of contraband tobacco across Ontario is approximately 33 per cent, with rates rising as high as 60-70 per cent in some areas of northern Ontario.

A Government of Ontario’s report commissioned in fall 2018 found the province is losing more than $750 million in excise taxes to the illicit trade. Combined with the federal excise tax losses, the total is more than $1 billion.

Ron Bell, the coalition's spokesperson and a 30-year veteran of the Winnipeg Police Service, said in the release Kenora-Rainy River is the gateway in Canada for contraband tobacco.

“All of the illegal cigarettes seized in Manitoba, Saskatchewan and Alberta are driven through the area and are usually sourced from southwestern Ontario.” Bell is quoted as saying in the release.

In the past two months, multiple seizures of contraband tobacco have taken place in the region. In addition to the May 10 incident in Blind River, other seizures took place April 30, May 16, May 26 and June 3, the release said.

In all, more than $1.3 million worth of illegal cigarettes heading westbound through Kenora-Rainy River to Manitoba and other western provinces were sized in the last 60 days along.

"The majority, if not all, of the illegal product is sourced from southwestern Ontario," the release said.

“Ontario continues to be the epicentre of Canada’s contraband tobacco problem," Bell said. "With one in three cigarettes sold being illegal, and the government losing over $750 million in provincial excise tax, it is clear that organized crime groups continue to act with near impunity.

"This is having a real impact on every Canadian province, from Newfoundland to Alberta.”

In Ontario, the province has set up dedicated groups to combat the illegal trade, including the Contraband Tobacco Enforcement Team and the Cornwall Regional Task Force, a partnership with the RCMP.

The money lost to illegal smokes not only enriches organized crime, the province said, but also is hurting local businesses and "taking millions of tax dollars away from public services, like education and health care."

The coalition against illegal tobacco said profits from cigarettes is used by organized crime for other illicit trades, such as the distribution and sale of illegal cannabis, cocaine and human trafficking.

"Even during the COVID-19 pandemic, these groups continue to transport and sell their illegal products from Ontario across Canada," Bell said in the release.