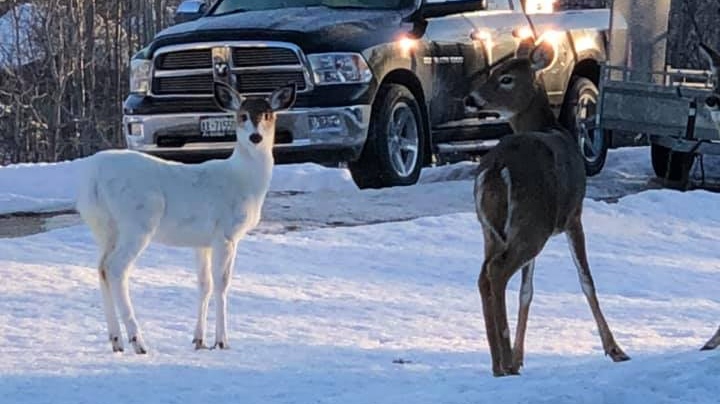 People are often captivated by wildlife in northern Ontario, and recently, a woman from Sheguindah First Nation encountered a rare deer.

Tammie Assinewai was travelling to Espanola with Dakota Recollet when she spotted a deer crossing the road on Highway 6 in Little Current on Manitoulin Island.

“We noticed a deer running across the road and (I) told Dakota to slow down because there are usually more, so another one went by. After the second one went by, we looked to our right and notice three others and one was white.” said Assinewai.

Often confused with an albino, the piebald deer can have varying amounts of white hair. While not as rare as an albino, the color variation is caused by a genetic defect and they are often born with arched spines, deformed hooves, shortened jaws, and short legs.

Thinking quickly, she snapped some pictures of the majestic creature.

“These three deer just stood there while I was taking the pictures, and once we were moving in the vehicle, then they scattered off, with one last one crossing the road. We headed on our merry way and both of us were just in aw after that.” said Assinewai.

She shared the photo on Facebook and it has had over 1,000 shares.

No doubt, it is an experience Tammie will never forget.