A large rally was held Thursday morning in the community of M'Chigeeng, on Manitoulin Island.

The event began with a march from the M’Chigeeng First Nation administration building to Manitoulin Secondary school.

Members of the First Nation community participated along with some senior leaders from the Anishinabek Nation to express their outrage over what they call a racist incident at the local high school.

Organizers of the rally say it’s aimed at addressing racism in a positive and constructive manner.

First Nation leaders are calling for changes at the school, suggesting more representatives on the Rainbow District School Board, and perhaps even building their own secondary school.

Chief Linda Debassige of M’Chigeeng invited other leaders to speak.

Grace Fox, a Rainbow District School Board Trustee and First Nations Director for the Ontario Public School Boards’ Association, was one of the speakers that addressed the crowd outside of the high school. 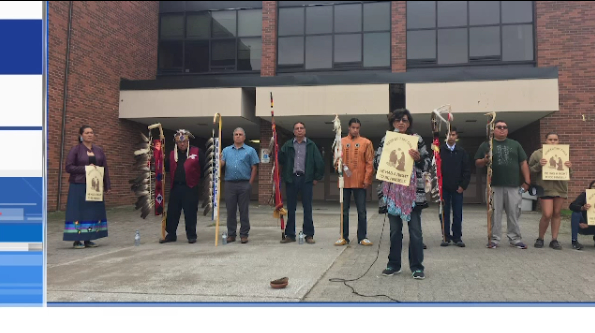 Under rainy skies, dozens of people gathered at the M'Chigeeng First Nation for a rally to talk about a recent incident at the local high school and what brought it on.

"The rally is a result of a violent escalation last week on Friday, at Manitoulin Secondary School, violence erupted and ended up with having racial undertones." said Debassige.

They marched about a kilometre down the road to Manitoulin Secondary School, which is where last Friday, the Ontario Provincial Police and the Anishnaabe Police responded to a disturbance between indigenous and non-indigenous students.

Jamie Mohamed is the Principal at Manitoulin Secondary School.

"It was a fight that did take place that we know was not originated in racism." said Mohamed.

He says the fight drew in other students and prompted some to make racially charged comments.

Police have charged one adult and five teens from M'Chigeeng with offences including uttering threats and assault.

"I don't want to get into details but i imagine yes there would probably be some disciplinary action." said Mohamed.

Demonstrators say that racism is a problem at the school, but the principal disagrees.

Pierre Debassige is a student at Manitoulin Secondary School.

"I most definitely certainly think there is racism within this school." said Pierre.

"I personally don't, but I was very happy to be a part and hear what our youth had to say." said Mohamed.

First Nations leaders say they want more communication between communities and increased Indigenous representation on the Rainbow District School Board.

Glen Hare is the Grand Council Chief for the Anishinabek Nation.

"We have a First Nation rep on there, Grace Fox. She's by herself, single handedly fighting all these issues for us. Maybe it's time we need a second seat." said Hare.

“I’m meeting with the other 11 First Nations that are under Rainbow District School Board. We will be discussing next steps.” said Chief Debassige.

The OPP say that they are still seeking several non-indigenous youths, whom they believe were involved in the fight and that the investigation continues.