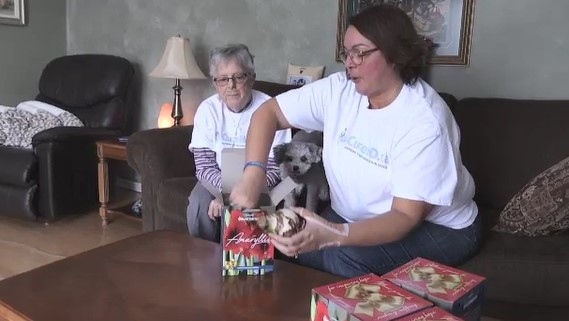 TIMMINS – Lynn Walker's two brothers, Paul and Brian, started showing symptoms of Huntington's disease around 12 years ago, just as their late father did decades before.

At that time, the Walkers felt lost, which is why Walker and her mother Donna Tremblay are leading the charge in Timmins to help others who are affected access support.

Walker describes Huntington's disease as a combination of Parkinson's, ALS and Alzheimer's.

Studies suggest one in every seven thousand Canadians suffer from Huntington's dease with children of those afflicted having a chance of developing it too.

Tremblay says caring for her late husband and two sons was nearly impossible on her own.

"This is an awful thing to say but people ask me, 'why did you have kids?' But I didn't know. We didn't know. Had I known when I got married, I probably never would have had kids," she expressed.

With Paul and Brian living at the Golden Manor, Walker says staff need more education about the disease, but are doing as well as they can.

"My brothers have a couple of very good caregivers that treat them like normal people. They know that they have this disease but they talk to them normally and they don't try to look down on them."

Walker hopes raising money through the Huntington's Society's annual Amaryllis fundraiser and hosting her own campaigns in the community will help drive that awareness and education in the north.

Her goal is to one day open her own chapter of the Huntington Society in Timmins.