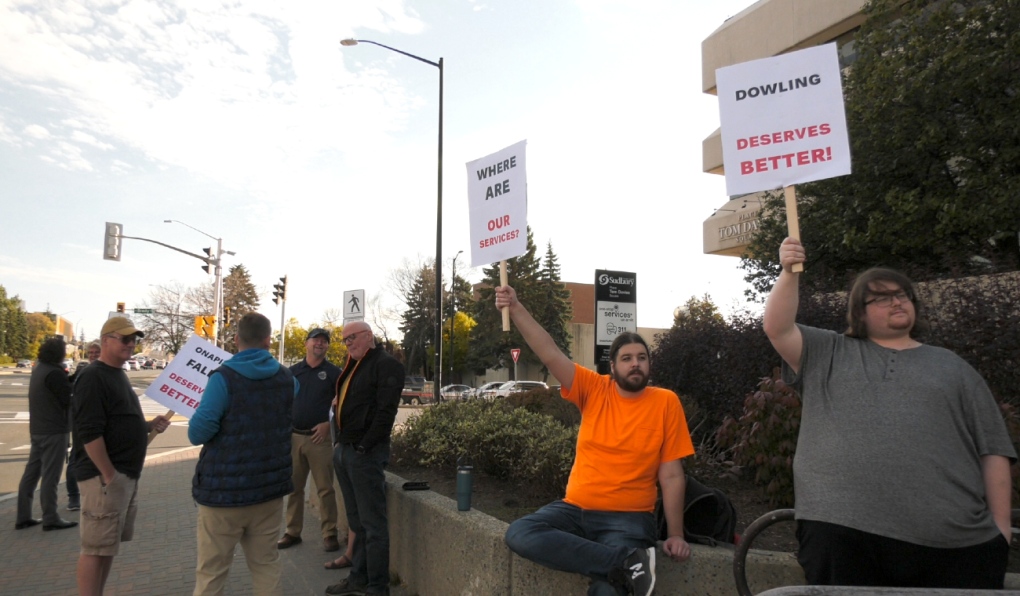 Protestors gathered outside Tom Davies Square on Tuesday afternoon to call for better services. The Greater Sudbury is Failing Us rally drew about a dozen passionate people from the outlying areas who say their communities have been ignored by the city for far too long. (Ian Campbell/CTV News Northern Ontario)

It was a small but passionate crowd outside Tom Davies Square on Tuesday, as roughly a dozen turned out for the Greater Sudbury is Failing Us Rally.

Organizers put together the event to call for change within the city structure and to remind the next council that outlying communities need to be treated equally.

"As we know amalgamation occurred two decades ago and there were promises that our services would increase, that we would be taken care of,” Chantelle Gorham told CTV News.

“And that was certainly not the case and we've seen with every passing year, a lack of services, us having to plead for basic services, whether that's police presence and basic infrastructure."

Holding signs that read "Where are our services?" and "Onaping Falls deserve better," the rally also drew out mayoral candidates Don Gravelle and Devin Labranche, as well as Ward 8 candidate Bill McElree.

"It's just important to me that people have access to better transport, first of all, that is my main concern,” Gabriel Durette, one of the protestors said.

“The bussing to Dowling is absolutely atrocious; it's borderline unusable and takes up to four hours to catch a shuttle."

The rally organizers said their goal is to create a community that is well maintained and treated fairly, regardless of what area you live in. Municipal resources have been sold off or pennies on the dollar and they add what little infrastructure they have, is often under the threat of closures.

"This is a reminder to incoming council whether they are re-elected or newly elected, we deserve better and we shouldn't have to beg for our services," Gorham added.