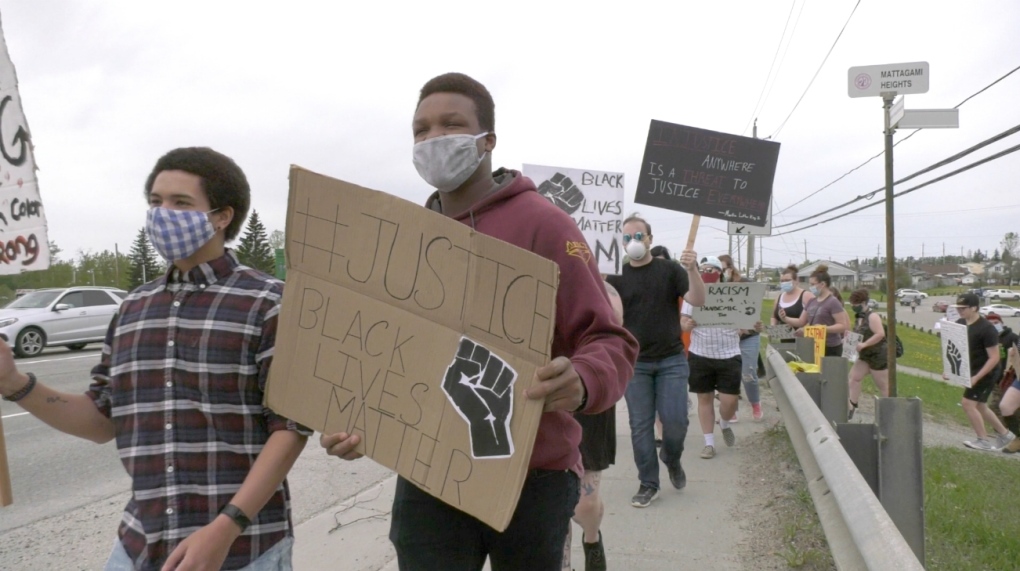 TIMMINS -- Dozens of people of various backgrounds marched again in Timmins on Friday to protest racism.

The demonstration was in support of the Black Lives Matter movement, and also to speak out on the injustices they say they experience in Timmins.

"Black Lives Matter, Black Lives Matter," shouted demonstrators from the banks of the Mattagami River at the Mountjoy Historical Conservation area, eastward along Algonquin Boulevard, to their final stop at the steps of Timmins city hall.

The event began at noon and closed a portion of Algonquin Boulevard in front of the municipal building. It lasted until around 2 p.m.

"We're also trying to rally for reform in the system 'cause without the end of systemic racism, we can't get rid of people's personal prejudice because we're making it OK," said rally organizer Sarah McKeacgnie. "We're being led by example.

No city officials were in sight at the event; Timmins police officers kept watch from a distance.

"You don't really see Timmins doing much," said Ceebe Matthews, one of the protesters. "So I'm glad people are actually doing something."

"I hope that there's more equality between everybody," added Sara Nightingale, another person who came to the march. "That everybody has a fair chance in life, everyone has the same form of justice

One woman -- who didn't want to be named -- brought her Black son and his friend to the rally. She told CTV News she came to be part of what she called a powerful experience, but said more needs to be done to put an end to racism.

"We experience it every day going into ... stores," she said. "Walmart, you know, just picking up a hamburger ... It's insane. We need to educate Timmins and being here today is a start, but it's not the end."

Organizers say plans are in the works to hold another gathering in the near future. They say it will be more of an opportunity for people to come together and share personal accounts of racist experiences.

"No one should be hating (people) because of the colour of their skin," said a Black youth who came to the demonstration with his friend.