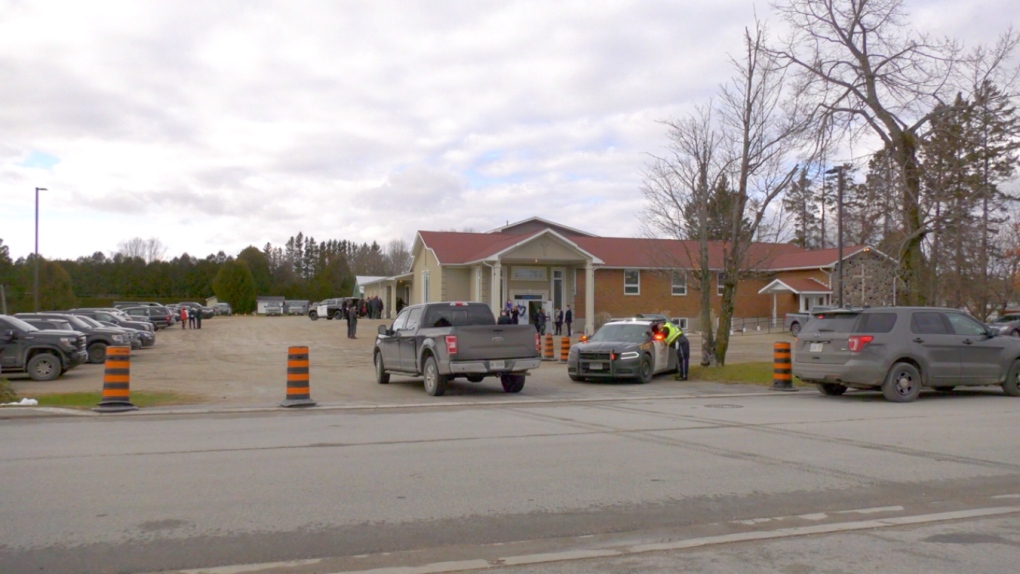 A visitation was held Friday in Mindemoya for Const. Marc Hovingh. A private funeral service will be held Saturday. (Ian Campbell/CTV News)

Ontario Premier Doug Ford will be attending the funeral for Const. Marc Hovingh on Saturday, his office confirmed Friday evening.

Funeral coverage will be streamed live on CTV Northern Ontario's website beginning at 12:30 p.m. Hovingh will be laid to rest in a private ceremony at Manitoulin Secondary School in M'Chigeeng at 1 p.m.

Hovingh was killed in the line of duty Nov. 19 near Gore Bay. OPP Commissioner Thomas Carrique told CTV News that coping with such a tragic, sudden loss is one of the most difficult things for a family to endure.

"But I'm amazed by the strength they have shown for all of us, they are truly leading the way and we will work through it together," Carrique said.

COVID has forced the family to make the funeral by invitation only. A public visitation Friday in Mindemoya was the only chance for many mourners to pay their respects to a man who clearly was beloved by many.

"What I remember about him now is his laugh and his character," said Kenneth Laroche, who was moved to tears thinking about his friend. "(He did) his patriotic duty and he was willing to die for it."

Those who made their way to Mindemoya were greeted with blue hearts, streamers thanks to the Neighbourhood Watch who wanted police to know they also grieve this loss.

"There's no words, said Janice Abbott, of the Mindemoya Neighbourhood Watch. "I don't know what to say ... I come from a police family and this really hits hard."

"Officers don't get a day to rebuild and recover -- they're right back at it in community every day," Carrique said. "Just yesterday, our officers were involved in a very tragic incident where a 1 ½-year-old boy lost his life and our hearts and our prayers go out to his mother and his family."