Power has been restored to a section of Timmins after a motor vehicle collision near the Bruce Avenue interchange caused an outage Tuesday morning and a local man has been charged.

The crash happened shortly before 7 a.m. when a single vehicle "failed to negotiate a curve," Timmins police spokesperson Marc Depatie told CTV News in an email. 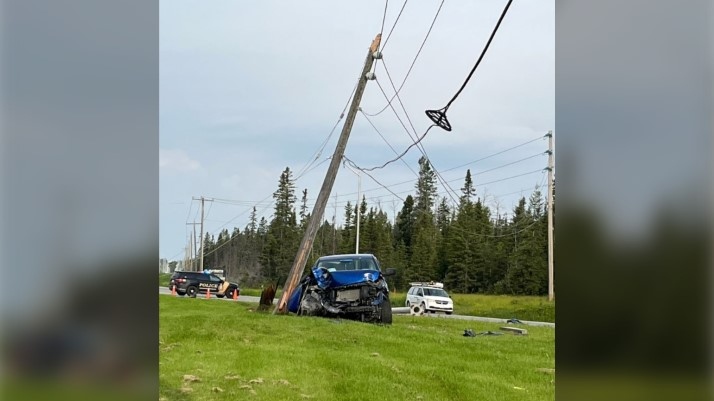 A 49-year-old South Porcupine man has been charged with careless driving after a crash in Timmins Tuesday morning. June 21/22 (Timmins Police Service)

The driver, who was the sole occupant, was shaken up and treated at the scene for minor injuries sustained in the collision, Timmins Police Service said in a news release Tuesday afternoon.

"Seatbelts do save lives," Depatie said.

As a result of the crash, a 49-year-old man from the South Porcupine area has been charged with careless driving, police said.

Highway 101 is fully reopened in both directions.

According to Hydro One, more than 1,600 customers were affected by the outage in the eastern part of the city, which lasted more than a couple of hours.

"The Timmins police extends its gratitude to those motorists who rendered assistance at the scene and to witnesses who came forward to provide investigative details," police said.

Canada’s deputy attorney general says the Department of Justice had ‘no involvement whatsoever’ in the department’s review and delivery of documents to ongoing independent public inquiry into the 2020 mass shooting in Nova Scotia.

Parents of young children will need a prescription for over-the-counter fever and pain medication due to a shortage in pharmacies, Toronto's Hospital for Sick Children is warning.

Explosions and fires ripped through an ammunition depot in Russian-occupied Crimea on Tuesday in the second suspected Ukrainian attack on the peninsula in just over a week, forcing the evacuation of more than 3,000 people.