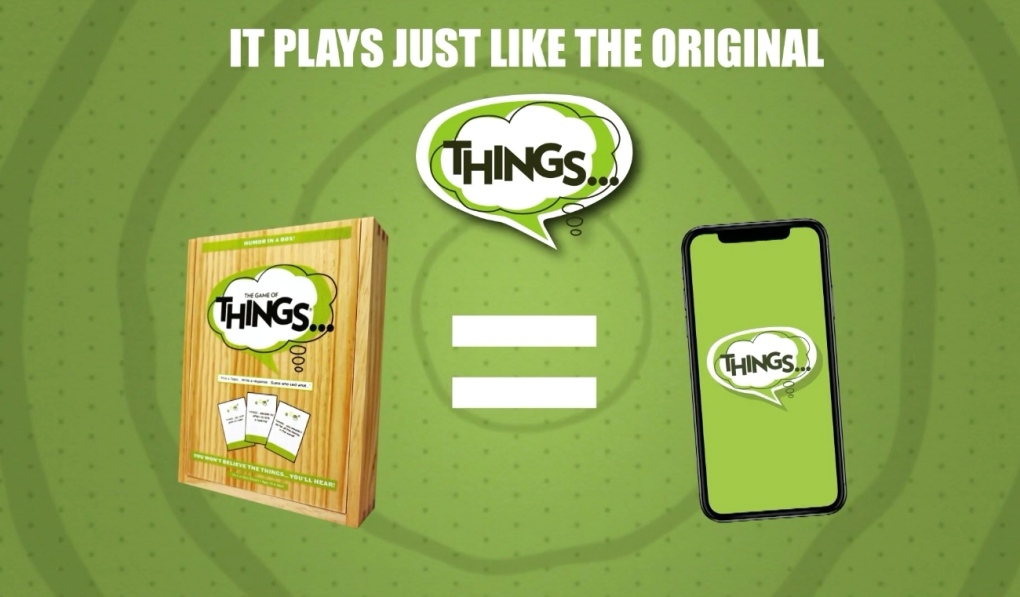 Aptly named ‘The Game of Things,’ its creators all have deep ties to North Bay, with one still calling the gateway city home. (File)

SUDBURY -- A popular party game that got its start in the north is out with a brand new mobile-app version.

Aptly named ‘The Game of Things,’ its creators all have deep ties to North Bay, with one still calling the gateway city home.

“(Co-creators) Ted and Tom came up one Christmas and Tom brought this idea for a game and we played it and we were laughing so hard we were crying and at the end of it I said ‘you know, we’ve got to make a game out of this’,” said Mark Sherry, the third co-creator and president of Quinn and Sherry.

Since its launch, the game has gone on to sell more than four million copies worldwide.

It’s based on a simple premise. Players write down a response to a given topic, such as ‘things you shouldn’t say to your mother.’ Once everyone is done, one player reads them aloud and everyone has to guess who said what.

“There are very few restrictions,” said Tom Quinn, one of the co-creators who now acts as creative director for Quinn and Sherry. “Really, what the game is, is an inspiration to write punch lines and to make your friends laugh and we’ve done a pretty good job of capturing that.”

The game has been featured in front of massive audiences, including The Ellen Degeneres Show.

“It’s phenomenal to see three guys from North Bay, we can pretty well go to any big retailer in North America, walk through and see our product there,” said Quinn. “It’s phenomenal.”

The team is now hoping to transfer their success to the digital realm with the launch of a free, mobile-app version.

While the game requires at least three people to play, Dion said it is very pandemic-friendly.

“This is very easily adaptable to play through Zoom, play online and not necessarily require people to be in the same room and have that same experience,” he said.

The launch comes at what appears to be an opportune time. While data has suggested for quite some time the video game industry has been increasingly popular in recent years, it appears the pandemic has accelerated that.

One of the things that most excites Sherry is the adaptability of the mobile app when compared to the traditional boxed game.

“Unlike the physical game, it’s much easier to change the content electronically,” said Sherry. “For instance we’re coming out with a Halloween version that will be released very soon, probably next week, which will be in time for Halloween.”

In addition to that, they expect to release other themed-versions including Christmas and Thanksgiving for next year.