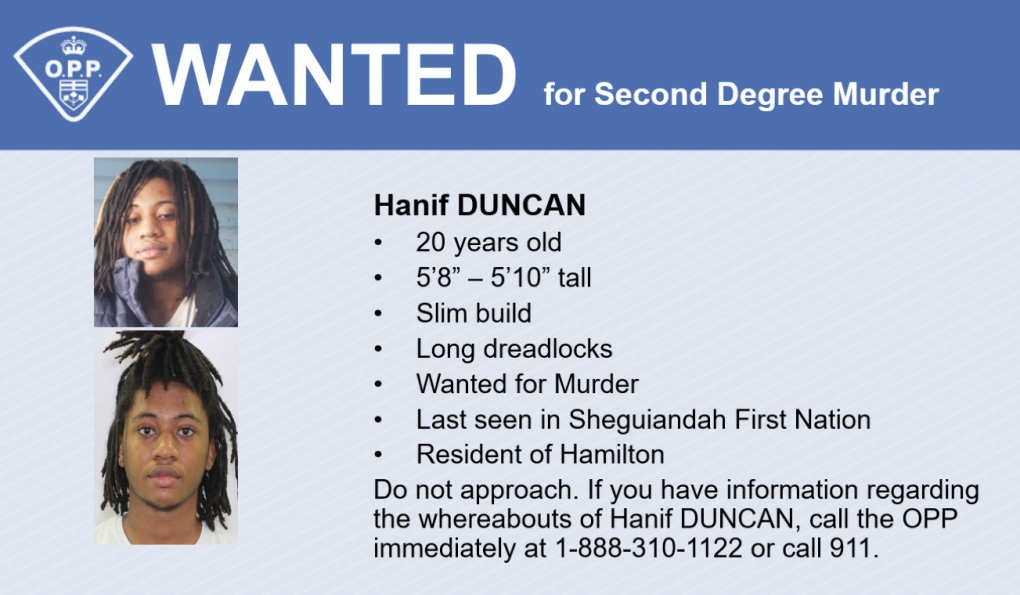 OPP say an arrest warrant has been issued for Hanif Duncan, a 20-year old suspect from Hamilton, after a man was shot late Friday night and later died from his injuries. (Supplied)

OPP say an arrest warrant has been issued for a 20-year old Hamilton man after a man was shot late Friday night and later died from his injuries.

The shooting took place at Sheguiandah First Nation on Manitoulin Island, police said in a release.

They said officers responded to a weapons complaint at an address on Wiingush Miikan. An injured 32-year-old man was transported by ambulance to a local hospital, where he died from his injuries.

An arrest warrant has been issued for 20-year old Hanif Duncan who is charged with second-degree murder. He is between 5-foot-8  and 5-foot-10 with a slim build and long dreadlocks.

Police said they believe this was a targeted incident and there is no public safety risk, and the accused is encouraged to turn himself in.

Police said if anyone has information regarding this incident, or knows the whereabouts of the suspect, they can contact the OPP or their nearest police service.

The Canadian Border Services Agency is temporarily allowing fully vaccinated travellers a one-time exemption to not be penalized if they were unaware of the health documents required through ArriveCan.

The man accused in the stabbing attack on Salman Rushdie pleaded not guilty Saturday to attempted murder and assault charges in what a prosecutor called a 'preplanned' crime, as the renowned author of 'The Satanic Verses' remained hospitalized with serious injuries.

Canadian Blood Services says it is in talks with companies that pay donors for plasma as it faces a decrease in collections.

The Prime Minister's Office says Justin Trudeau will accompany the chancellor of Germany, Olaf Scholz, on a brief Canadian visit later this month that will include stops in Montreal, Toronto and Stephenville in western Newfoundland.