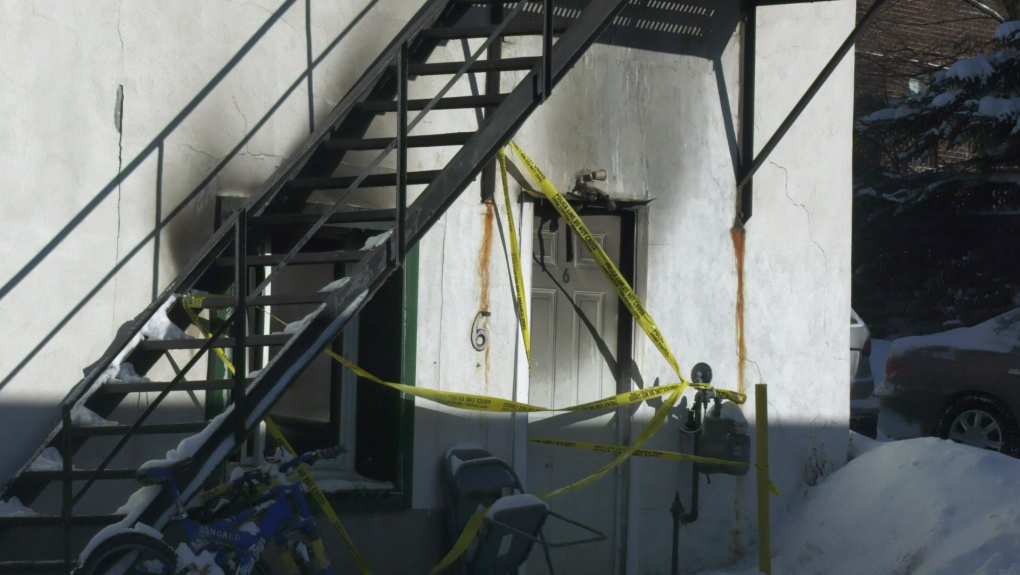 Deputy Chief Jesse Oshell says the construction of the building, the cement walls and cement floor, helped contain the flames and much of the smoke damage to the one unit. Dec. 29/20 (Ian Campbell/CTV News Northern Ontario)

SUDBURY -- There's no word yet on what could have caused Monday night's fire in the Sudbury community of Donovan.

A 9-1-1 call was made as the flames broke out in Unit #6 of a six-unit apartment building in the 200 block of Frood Road.

Neighbours tell CTV News that fire crews were only on scene for a few hours after being able to knock down the flames fairly quickly.

"Our firefighters attended, the occupants were out of the unit at the time of our arrival, one individual required medical attention and was transferred to Health Sciences North by Paramedic Services with non-life threatening injuries," said Deputy Chief Jesse Oshell.

Oshell says the construction of the building, the cement walls and cement floor, helped contain the flames and much of the smoke damage to the one unit.

"Chemical products burn very quickly and cause a lot of toxic, hazardous gases and so that fire burned hot and burned fast and getting it under control quickly was key but the construction of the building certainly aided in the spread being contained to just the one unit," he said.

Damage inside that apartment is said to be extensive. He pegs it anywhere between 50 to 100,000 dollars.

"At this time we don't have a direct cause, we passed the investigation over to the Ontario Fire Marshal's office and Greater Sudbury Police Services who are investigating it as a suspicious fire, arson fire," said Oshell.

One man who lives in the adjacent unit, says he saw a little bit of the smoke enter his property.

He says it all happened so fast, he came out to find some of the residents with no shoes on as they were working to help the injured man.

Investigators with the Ontario Fire Marshal's office and the Greater Sudbury Fire Service could be seen entering the suites to assess the building.

Oshell says the city did end up providing some of the tenants with fire and smoke detection devices before they were able to return.