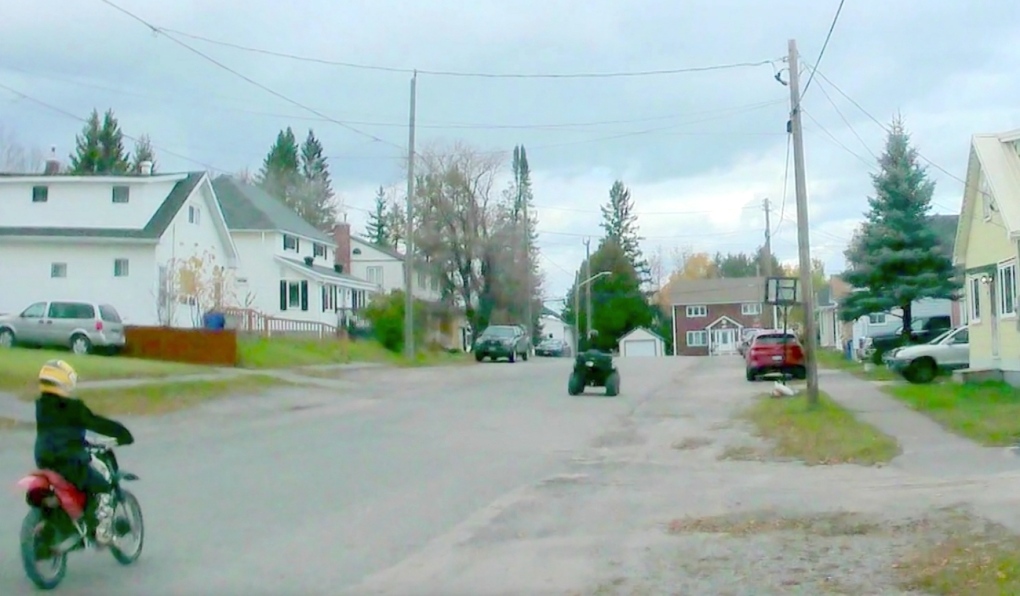 Residents in the Connaught Hill neighbourhood in the east end of Timmins are taking photos of people riding all terrain vehicles and other recreational vehicles on the streets. Currently, there is no law in the city that permits such activity. (Photo supplied by Timmins Police Service)

TIMMINS -- Timmins City Councillor Mickey Auger said it's "unbelievable" what he's been seeing on Tisdale Road in South Porcupine and on other streets in the Connaught Hill neighbourhood.

He told CTV News he sees many young people under the age of 16, some without helmets, "flying up the road" and doing "wheelies" to get to the bush.

"I'm worried that one of these kids are going to get hurt -- if not killed -- with the big ore trucks coming down the road and stuff like that, they don't see them right because the bikes are small," said Auger.

He's not the only one. Timmins police officials said other residents in the area have been calling in complaints.

"It's a chronic issue and the persons that have brought it to our attention make an articulate point: the fact that they have small pets, they have small children, they have senior citizens who use this area as pedestrians," police said.

Auger said it's a safety concern that's been going on for at least four to five years and, as a retired police officer, he thinks more patrols of the east end need to be done.

"The problem is, here the young people don't see the police, they figure they can get to rule the road, and do what they gotta do," he said.

Timmins Police said they're on it.

"We'll set up at key locations where the most frequent amount of sightings have taken place. We do have photos provided to us by concerned citizens."

Auger said weekends are when the majority of the incidents are happening, however, an occurrence on Wednesday afternoon has police looking for someone in particular.

"That person wasn't wearing a helmet and when attempts were made to stop by the police to bring this person to a complete stop, that person chose to evade the police and commit a series of other offences, placing himself and perhaps pedestrians and other persons at risk," he said.

Police have not issued any fines to any of the riders yet. For now, they're asking those who are breaking the rules to change their ways, but say they will be watching.