Partnership aims to get mining book into local schools 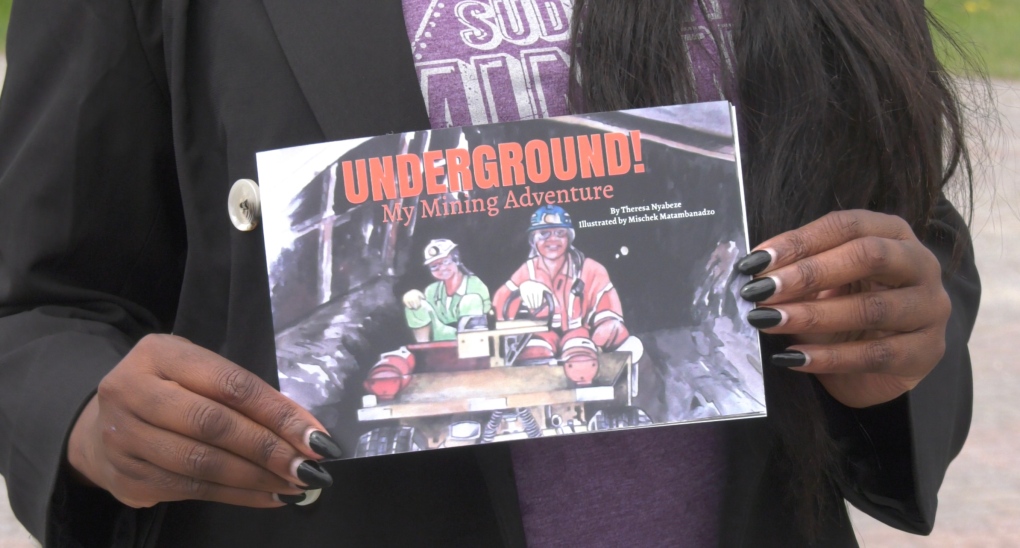 When Theresa Nyabeze wrote the book ‘Underground! My Mining Adventure,’ it was always her dream to have it end up in as many hands as possible. Lyndsay Aelick photo

When Theresa Nyabeze wrote the book ‘Underground! My Mining Adventure,’ it was always her dream to have it end up in as many hands as possible.

“It’s about a little girl who gets an opportunity to go underground for the day, and she has all these misconceptions about what mining is, the kind of people she is going to interact with underground, and what she’s going to see,” said Nyabeze..

“Really, the book is her journey of uncovering the real truth which is, of course, opposite than she thought,” she said.

That dream will become a reality due to an initiative with a local clothing company, My Mining Tee.

“For each Sudbury mining camp t-shirt sold, one book will go to a local school,” said Jeff Lafortune, My Mining Tee Co-Creator.

Nyabeze said it’s a way to equip schools with resources that are critical for promoting educational success, and the tools needed to stimulate young people’s interest.

“They learn from role modeling and seeing that he saw my book. It’s a natural way of meeting kids where they are to start to introduce them to the concept of mining. As a teacher, he sees the drying up of the pipeline which affects our industry,” she said..

Sudbury Mining Camp Tee shirts can be found at True North Made in the New Sudbury Centre.

The campaign will be ongoing, and books will be delivered in time for the start of the next school year.

“We’re hoping to raise enough for 120 books to be able to donate them to the four school boards and to some native communities in our area.  We hope to get them out to the students in their libraries and in their hands so they can see what it looks like,” said Lafortune.

Some of the terminology that appears in Theresa’s book, and some of the pictures are something that makes the wow factor for them to say: Hey I’m going to question somebody, I want to know more about this industry,” he said.

T-shirts can also be purchased on the company’s website at www.myminingteeshirt.com

Trump told officials to 'let my people in' and march to Capitol on Jan. 6, former aide testifies

Donald Trump rebuffed his own security's warnings about armed protesters in the Jan. 6 rally crowd and made desperate attempts to join his supporters as they marched to the Capitol, according to dramatic new testimony Tuesday before the House committee investigating the 2021 insurrection.

Who is Cassidy Hutchinson, the Meadows aide testifying before U.S. Congress?

The top aide to former White House chief of staff Mark Meadows who is testifying before the House select committee investigating the January 6, 2021, Capitol riot was a young, fast-rising star in the Trump administration.

B.C. Premier Horgan announces he will step down

After five years in the role, John Horgan announced on Tuesday afternoon he plans to step down as premier of British Columbia and has asked his governing party, the NDP, to hold a leadership convention later this year.

Ghislaine Maxwell, the jet-setting socialite who once consorted with royals, presidents and billionaires, was sentenced Tuesday to 20 years in prison for helping the financier Jeffrey Epstein sexually abuse underage girls.

The federal Liberal government has agreed to provide sensitive cabinet documents to the inquiry examining its use of the Emergencies Act during the "Freedom Convoy" protest.

A jury at a coroner's inquest into the deaths of three women murdered by their former partner is recommending that Ontario formally declare intimate partner violence an epidemic and establish an independent commission dedicated to eradicating it.

Adults over 50 who have had COVID-19 are more likely to experience a shingles outbreak, according to a study published in May.