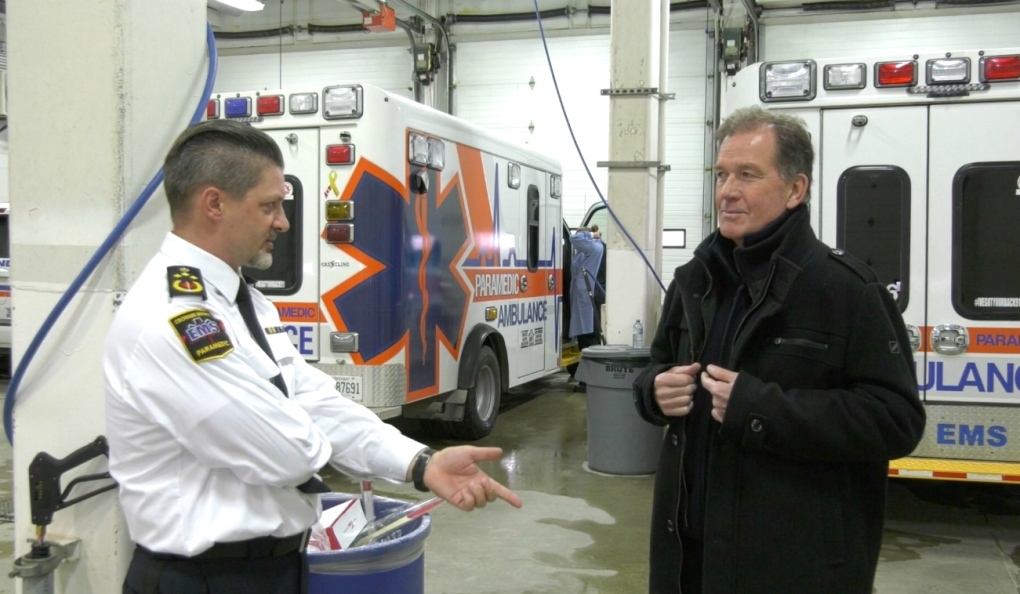 Jean Carriere, chief paramedic for Cochrane District EMS, explains to Timmins Mayor George Pirie how paramedics will be able to host health or vaccine clinics at seniors apartment buildings and long-term care facilities, but will also be equipped to respond to an emergency. (Lydia Chubak/CTV News)

TIMMINS -- The Cochrane District is one of five in Ontario that’s receiving funding to expand its community paramedicine programs.

The chief paramedic in Timmins said Tuesday six more paramedics are being hired and two more vehicles are on the way.

"The monies that are coming to the Cochrane District are based on long-term care wait lists and the long-term care wait list for the Cochrane of District is currently around 425 people," said Jean Carriere. "What that does is it qualifies us this year -- so the fiscal year until March 31st -- for up to $500,000 and next year as we move forward with the pilot, up to a $1 million a year.

Community paramedicine has been a pilot project in the Timmins area for the past three years.

Carriere said it means people returning home after a hospital stay, for example, could have access to around the clock remote patient monitoring services, home visits and virtual supports, among other services.

He said it works well, especially where support services for seniors are few. At one local seniors apartment building, Carriere said he has seen a big drop in 911 calls.

"For a facility like that, which you wouldn't think is that big with a hundred apartments, we were doing about a hundred calls a year there and we've been able to drop that down to 50 calls," he said. "That can be interpreted to 50 ambulances going there and 50 patients going to (the emergency department) and the treatment that goes along with that.”

"My mother-in-law was living ... in her own home until she was 95 years old until she passed away just in May this year and that's where the individuals want to live," Pirie said. "They want to stay in their homes where they're comfortable and their family can come in and out and … this program that we're talking about today allows these individuals to do that."

The mayor said the community paramedicine program in Timmins is not just meeting a standard -- it’s defining a standard for the rest of the province.