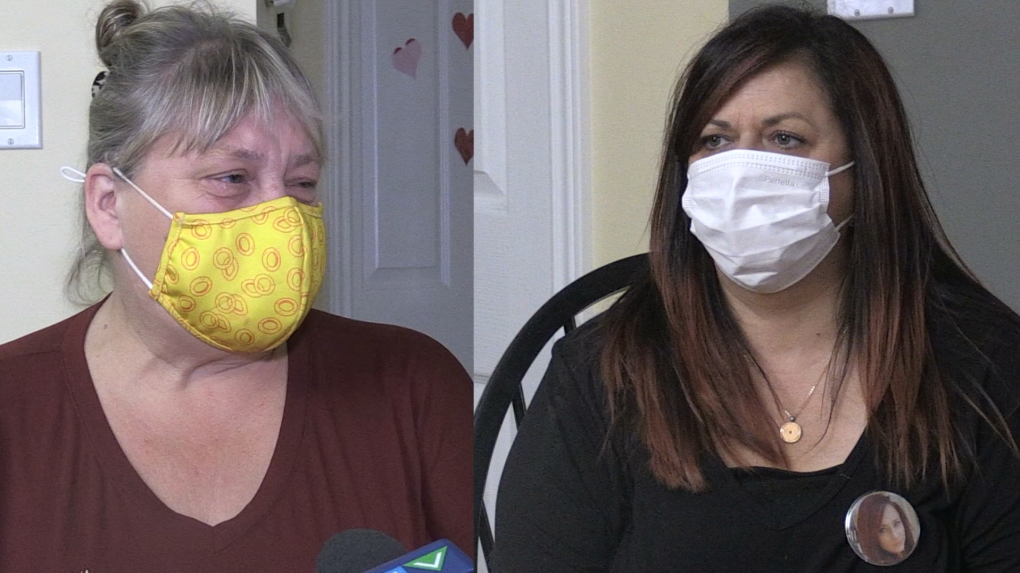 Lisa Foggia and Rhonda Forcier recently befriended each other, after both experienced the loss of their children to overdose deaths. Nov. 22/20 (Christian D'Avino/CTV News Northern Ontario)

SAULT STE. MARIE -- Under the veil of tragedy, two mother's in Sault Ste. Marie are coming together to fight the opioid crisis.

Lisa Foggia and Rhonda Forcier recently befriended each other, after both experienced the loss of their children to overdose deaths.

"We're not just worried about the COVID pandemic, because the opioid pandemic is here, it's alive, it's well and it's going to keep on going," said Lisa Foggia.

"If help doesn't come, it will keep on going and I won't stop fighting until we end this."

In Foggia's case, it was the loss of her daughter, Tia, that sparked her battle against on-going drug issues within the city.

She said her daughter was unable to get treatment in Sault Ste. Marie with waiting lists at publicly funded facilities heavily backed up.

"Tia eventually got into a rehab facility in Elliot Lake, but still had to wait months before being allowed to check in," Foggia said.

"That wait is what cost her, because on November 1, two weeks before checking-in, my daughter overdosed and died."

Rhonda Forcier meanwhile, is marking the one year anniversary of the death of her son, Wayne.

While that event alone was tragic, she said her second son, Ryan, recently revealed to her that he's also struggling with addiction.

"We had no choice but to check him into a private facility down south," Forcier said fighting back tears.

"There's absolutely nothing anywhere for him and I couldn't stand to lose another child to drug overdose."

That decision comes with a hefty cost, with a price of over $30,000 just for 45 days of treatment.

She's turned to crowdfunding through a GoFundMe page, in order to help pay for that treatment.

She's also resorted to selling off some personal items. However, if given the choice to do it again, Forcier said she would.

"It's disgusting that the government can get away with charging HST on treatment for my son, but won't properly fund our city when it comes to healthcare that is desperately needed," she said.

"People are dying, my son lost his life because there was nothing for him, why are they letting people die?"

Foggia and Forcier recently got together with the Addictions and Mental Health Advocates, a non-profit group in the city.

Foggia also met with Sault Ste. Marie Mayor Christian Provenzano earlier this week, in an attempt to find out what's going on.

"I found the mayor to be very empathetic towards our cause," Foggia said.

"He explained that there's just not enough funding from the province when it comes to our healthcare system, making things challenging."

We do need, locally here in Sault Ste. Marie, we would very much benefit from a capital investment," said Lisa Case, Clinical Director of Mental Health and Addictions.

"We desperately need more beds for a residential detox facility, in order to give these people a place to go where it's safe."

Case said the hospital is in the process of asking the province for help in funding a new 24-bed facility.

Right now, only 10 of its 16 beds are allowed to be used, due to COVID-19 restrictions.

"That lack of space is certainly at a detriment to the treatment we're trying to provide at the hospital," Case said.

SAH said it's also aiming to launch a mobile treatment bus in December, with a goal of getting to people in the community, rather than them coming to the hospital.

Meanwhile, Foggia said she and the mayor are planning a sit down with the province and healthcare providers, in order to discuss ways to bring crucial funding to Sault Ste. Marie.

"If they (provincial government) wants to make sure everyone is funded, then fund everybody," she said.

"This isn't strictly a Sault Ste. Marie issue, but we all desperately need that help, our kids are dying."