SUDBURY -- Overcrowding at hospitals is a major problem in Ontario and Sudbury's hospital, Health Sciences North, still struggles with capacity issues every day.

A Sudbury woman took to social media after hearing her friend's 89-year-old mother's personal hygiene was not attended to and was moved five times before she got a hospital room.

To say Linda Kent is upset would be an understatement.

"I’m going to tell you, this ministry, and I mean it full-heartedly and I hope you take it to heart, you’re killing people," said Kent.

Her Facebook post has now been shared hundreds of times, people even sharing their own hospital horror stories.

"There are people telling me about how their loved ones have been put in showers (instead of a hospital room). It’s absolutely disgusting. And my friend, Claire, her own mother couldn’t have a shower for 12 days. What’s wrong with this picture?” said Kent. 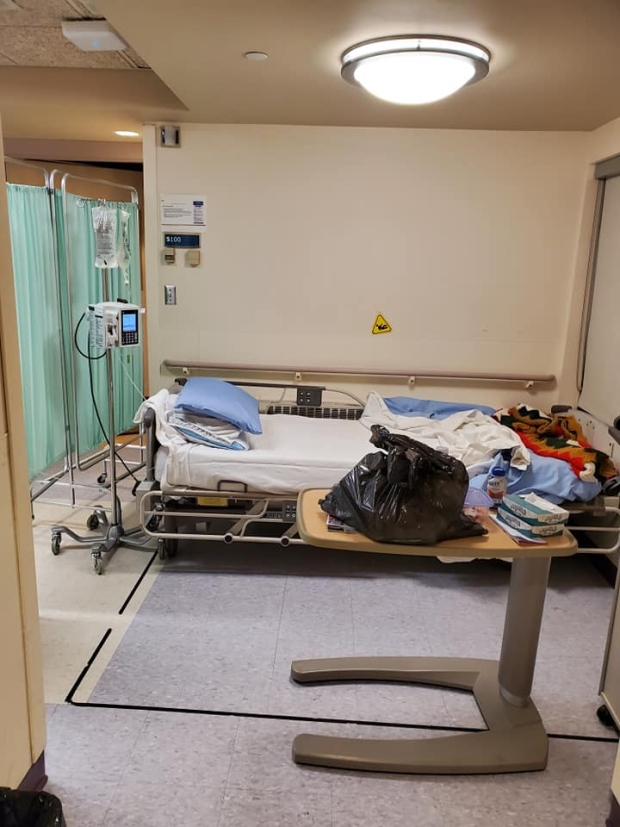 Claire Gravelle's upset with her mother's treatment at the hospital, which inspired Kent's social media post.

"It’s been a nightmare for myself, but worse for my poor mother because she’s so elderly and doesn’t want to make waves, so she says 'it’s okay, don’t say anything.' And I’m telling her' mom, it’s not okay'," said Gravelle.

Pictures have started to emerge on Facebook of blankets hanging up in the hallway haphazardly in an effort to give some patients privacy.

According to the hospital, 62 patients are currently in a hallway waiting for a room.

Dominic Giroux is the president and chief executive officer of Health Sciences North. He says while the situation is not ideal, they are working with what they have.

"And that’s not how we want to provide care for patients. Would I want my 76-year-old mother to be cared for in a hallway? The answer is no. Our staff goes above and beyond to provide the best care possible to the patients within the constraints that they have," said Giroux.

The hospital CEO says they submitted a plan to the ministry for 37 new beds back in January, but they are still waiting for a response.  Meanwhile, they’ve had time to work on alternative plans B and C.

Ontario NDP Health Critic France Gelinas says tens of millions of dollars were set aside in surge money to address the issue. To the best of her knowledge, none of that has made it to northeastern Ontario.

"We are at the verge, we can’t take this anymore. We deserve better, the hospital deserves answers,” said Gelinas.

In her 12 years as health critic, this is the worst she has ever seen.

With flu season upon us, she fears things could get worse in Sudbury before they get better.

The Ministry of Health tells CTV News that the province will invest an additional $384 million in the hospital sector through 2020, including close to $67 million to address high occupancy challenges.