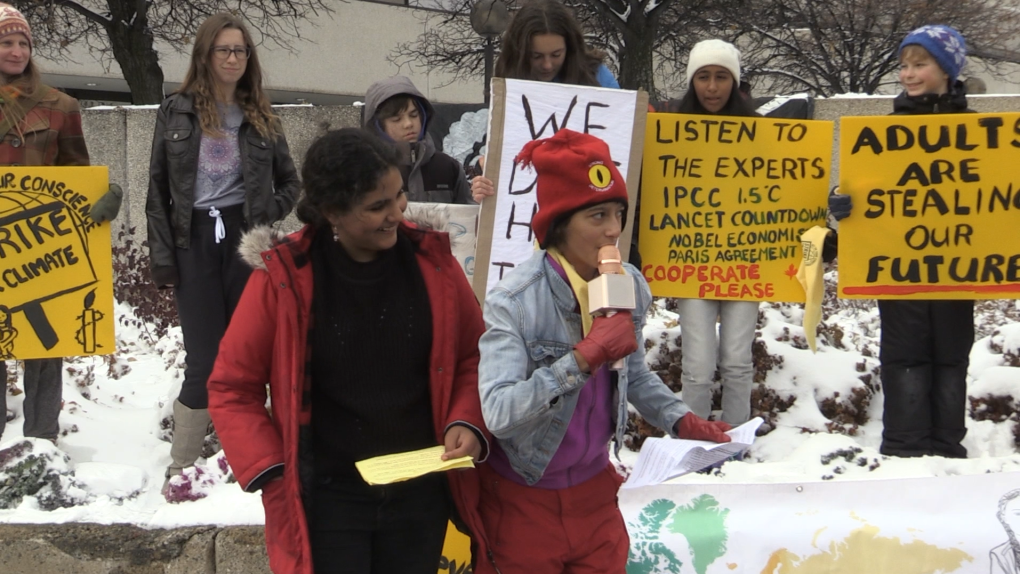 NORTHERN ONTARIO -- The Ontario government has filed a motion to strike against a youth-led climate lawsuit filed late last year.

The lawsuit, led by seven youth, including Sudbury’s Sophia Mathur, alleges that a previous decision by the Ford government to weaken its climate targets is a violation of the Charter of Rights and Freedoms, concerning protected rights to life, liberty and security of the person.

"The Ford government knows that it can't argue against the science of climate change and it can't argue against the urgent need to take more concrete action on climate change," said Fraser Thomson, a lawyer with Ecojustice who is representing the case. "So, it's unfortunate that it's brought this motion, but our clients are confident that the science is on their side."

Mathur said she knew going in that this was going to be a fight.

"When we first started this case, I said that I thought Doug Ford was going to be scared when he heard about the case, and I think he was scared," said Mathur. "I think he's scared that the public is going to start hearing this case out and starting to understand that the Ford government isn't taking enough action."

Mathur along with her fellow youth activists argue that the province's current 2030 target to reduce greenhouse gas emissions to 30 per cent below 2005 levels is not enough.

Thomson said the courts will hear this latest motion in July, pending no further changes to court schedules are made as a result of the COVID-19 pandemic.

"This is an attempt by the Ford government to stop the case from going forward. The unfortunate result is that it's going to cause some delay and when it comes to climate change, we know the science is telling us we can't afford any more delays, so this is an unfortunate development," said Thomson.

In a statement to CTV News, a spokesperson for the Ministry of the Attorney General says:

"The Ministry can confirm the motion materials were served on applicants’ counsel. Ontario’s position is that it is plain and obvious that the application will fail, as the issues raised are not matters that should be dealt with in court."

Despite this latest setback, Mathur says she remains as motivated as ever.

"It motivates me because now we're going to court and now this case is going to get more attention and more people are going to hear about this. And I know that the people of Ontario care about the climate crisis and I know a lot of people want our case to go on and they want us to win," said the Sudbury climate activist.

Cathy Orlando, Sophia's mother, also serves as the international outreach manager for Citizens Climate Lobby, a non-profit group focussed on national policies to address climate change. She is also the national director for the Canadian chapter.

She is frustrated by this latest development in her daughter's lawsuit, saying good climate policies will benefit governments in the long-term.

"It's our unalienable rights as citizens to have a safe environment, and especially our children, and that is the whole point of this lawsuit," said Orlando. "The 21st century will belong to the countries that have the best climate policies, and the best climate policies reduce emissions and do it in an effective and efficient way and it's their right to do this."

Mathur, who has been leading Sudbury's Fridays for Future climate-change rallies, says she hasn't stopped despite the COVID-19 pandemic.

"We're doing online strikes. So, instead of going out in the streets, we post online. We still get a lot of attention and sometimes we'll have calls with my friends and we'll have a Zoom rally," said Mathur.

The young activist says she will keep the public informed on upcoming dates and information related to future rallies.