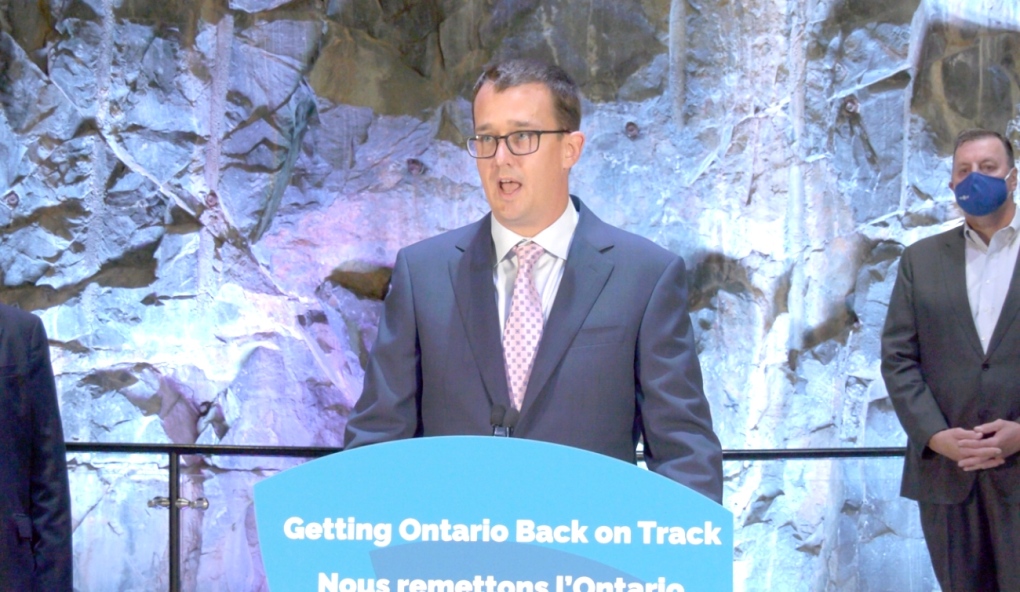 Jobs and skills training took centre stage for Ontario Labour Minister Monte McNaughton as he visited Sudbury on Friday. It's the latest stop in his province-wide tour where he announced almost $2 million in new funding. (Ian Campbell/CTV News)

SUDBURY -- Jobs and skills training took centre stage for Ontario Labour Minister Monte McNaughton as he visited Sudbury on Friday. It's the latest stop in his province-wide tour where he announced almost $2 million in new funding.

It's expected to help more than 2,000 students, unemployed adults and Indigenous community members find work across northern Ontario, many of whom are having difficulty in remote areas.

"We are on the path to economic renewal of the province and training programs are on the priority list for the ministry that I lead," McNaughton told the audience at Science North. "The Sudbury area is one of many in the province that has suffered economically over the past six months. Although you've got the lowest unemployment rate in all of Ontario -- 8.6 per cent in August -- it's still much higher than it was in February and much too high for my liking."

Six recipients are receiving funding as a part of the announcement, including Science North. The Sudbury facility will get $428,870 to promote tech-sector training for up to 905 students, teachers-in-training and underemployed adults.

There will also be $500,000 for the Shwe Miikaan and Confederation College Construction Trades Training Project, which will prepare 32 Indigenous community members for careers in local construction, specifically working on Highway 69 from Parry Sound to Sudbury.

Northern College will get $487,000 to train 75 public administration employees in northern municipalities around Sudbury and Sault Ste. Marie.

There will be $250,000 for the Wikwemikong Development Corp., which is currently preparing 17 Indigenous community members for work as public support workers on Manitoulin Island.

And $96,200 has been earmarked for the Near North District School Board to train 1,000 students in financial literacy and job-specific computer skills.

"The health and safety of the public is our government's top priority," McNaughton said. "We want to ensure they remain healthy and safe but at the same time we want to ensure that people have jobs and we know there are thousands of jobs that exist today but businesses can't find workers to fill those jobs."

It's been an incredibly busy time for the Ministry of Labour, said McNaughton, largely because of COVID-19.

"The Ministry of Labour has done 21,000 investigations due to COVID-19 since March, they've also issued 16,000 orders to ensure that workers remain safe while on the job," he said.

The workload is so big they've begun hiring additional inspectors across the province, including Sudbury, to adapt to the new workflow.

"When we recruit those 100 new inspectors, it'll bring the level of inspectors to the highest that it's ever been," said the minister.

"It's a huge announcement and one that will be of great benefit to the north and to the communities of Parry Sound/Muskoka," said the area's Progressive Conservative MPP Norm Miller. "I think it'll have the most effect for the individuals who get the training, where it really makes a difference to their life and they're able to acquire a skill and from that get a good job and support a family and support the community and just improve quality of life so I think it's very positive."

"A number of organizations are getting this funding, it really supports their work in trying to get people better connected, better equipped and trying to acquire skills that are important in today's economy, especially as northern Ontario recovers from the pandemic," Labine said.

Later in the day, McNaughton was invited to inspect a home build in Sudbury's east end by the Ontario Home Builder's Association.

"Hopefully we can show him all the protocols and procedures that we have in place and, you know, we'd like to keep working with the minister and the government," said vice-president Louie Zagordo.

Zagordo said they have faced challenges, just like every other industry, and he welcomed the chance to give the minister a first-hand perspective.